The UN Strategy on Gender Parity

The Secretary-General is making a high-level, credible push on gender parity, but leadership roles, especially at larger entities, remain a sticking point

More than 20 years have passed since the United Nations (UN) first committed to achieving gender parity in its managerial and decision-making positions, but the organization still has a long way to go. Karin Landgren, a former senior UN official, provided the data two years ago to show that gender parity at the UN had become a “lost agenda” under the previous Secretary-General, Ban Ki-Moon. And in spite of a push to have a woman at the top of the UN hierarchy for the first time, the front runners in the Security Council straw polls for a new Secretary-General were largely men. (Perhaps Wonder Woman would have stood a better chance.) Yet the new Secretary-General, António Guterres, seems determined not only to talk about change but to effect it. After ensuring a 50/50 split in his own appointments at the senior level, Guterres has released this week the report of the Gender Parity Task Force: a far-reaching “System-Wide Strategy on Gender Parity,” which does not pull any punches in describing the current situation for women trying to make a career inside the UN bureaucracy.

The report soberly notes, “There is an inverse relationship across the system between seniority and women’s representation—the higher the grade, the larger the gap in gender parity; the gaps to parity is wider in the Secretariat than the rest of the system at all levels.” A number of bright spots for parity exist within the system: for example, five UN entities have already reached gender parity at professional levels or higher. But nowhere is the gender gap more evident than in the UN’s peace operations, which the report dismally estimates will need 703 years at its current rate of increase to achieve parity in its most senior director level.

Tracking the recent headlines in US publications on gender in the professional sector like The Atlantic (“The Confidence Gap”), the Harvard Business Review (“Why Women Don’t Apply for Jobs Unless They are 100% Qualified”), and drawing on the UN’s internal data on women applicants for jobs, the report provides a comprehensive agenda for changing systems, incentives, behaviors, and organizational culture in a spare 26 pages. The deadline for achieving the mission is 2026—or 2028 if your entity is starting out far behind the target.

It has become increasingly unsustainable for the world’s leading multilateral organization—whose bedrock principles include human rights and women’s equality—to continue to reproduce patterns of gender inequality. Although at this point the UN is no stranger to gender parity policies, efforts, and task forces, the report has found that:

The gender gap in field missions is particularly worrisome, as these are the public faces of the UN. They are an expression of the UN’s values, and, on a practical level, they have to employ people that local people—men, women, youth, minorities—can trust and engage with.

So what is to be done?

The report covers a range of initiatives that would be carried out mainly by individual entities within the organization, with a strong focus on reforming internal processes (mainly in human resources) in order to attract, retain, develop, and promote more women. It recommends a set of “special measures”—temporary in their nature—to be adopted in order to catalyze change. Many useful ideas are presented; for example, job openings that fail to attract at least 20 percent female applications would require written justification from a hiring manager (an extra bureaucratic step that anyone would want to avoid, if possible). It also suggests strategies for reducing unconscious bias and for increasing the pool of women candidates, particularly for jobs in the field.

Another key issue is addressing the way that demanding UN jobs tend to impact on men and women differently, given their different roles at home. A set of recommendations related to flexible work arrangements, maternity/paternity/adoption leave policies, and so on are helpfully suggested. These are intended not just to benefit women but also to support greater gender equality and equal distribution of the division of labor within UN staff families. Homing in on the particular differences for women and men of working in mission settings, the report draws some its sharpest conclusions: the UN has struggled to attract and retain women in the field, even in those agencies (such as OCHA and UNHCHR) that have done a remarkable job of working toward gender parity at the overall institutional level. But no aspect of the UN’s work is less diverse than peace operations, where the report suggests that ratios of women/men may actually risk moving in a backward direction if there is not strong action in the short term.

The report pays attention to the gendered nature of types of work, particularly those supporting peace operations such as logistics, security, and engineering (male) and those related to humanitarian work such as education, health, and social work (female). Where the broader workforce skews toward one gender or another, there will be obvious challenges in attracting sufficient numbers of the “missing” gender.

How these reforms link up with the UN’s other reform processes is a key practical issue that remains unaddressed in the report. To take one example, in the new organizational chart for the peace and security architecture announced by the Secretary-General, we observe a box marked “gender” floating mysteriously between USGs, but with no explanation of what this means. (We note, that the Global Study on SCR1325 advocated for improving the integration of DPA and DPKO, as well as UN Women, on backstopping missions—whether or not this has surfaced as a priority in the reforms is unclear.)

What does “parity” really mean? The issue of senior leadership

Special attention is given to doing a better job both at recruiting women at the senior level and improving the internal pipeline toward senior jobs for women. A positive example of this is the Department of Field Services’ “Senior Women Talent Pipeline,” which developed external candidates for Director level (D1 and D2) positions. The report calls for a modern executive search function for senior appointments and other improvements.

Where the report could have taken a stronger position on the issue of roles seen as more “suitable” for men or for women is in relation to leadership of large organizations. Just as in the private sector, where there is a dearth of women in CEO positions in large corporations, so in the UN the largest agencies, funds, programs, and departments—as measured by expenditures (in 2016)—are nearly exclusively headed by men. Of the top ten—DPKO, UNICEF, WFP, UNDP, UNHCR, WHO, IOM, PAHO, UNRWA, and FAO—only PAHO (the Pan-American Health Organization) is currently led by a woman, a medical doctor from Dominica, Clarissa F. Etienne. If we look at Under-Secretary-Generals (USGs) currently in office, 73 percent are men; however, if we look at the ten largest entities headed by USGs, 80 percent are headed by men, and the top six largest are all headed by men (DPKO, WFP, UNDP, UNICEF, UNHCR, and UNRWA). Even more strikingly, looking at the budgets, we see that male USGs are in charge of 95 percent of the budgetary dollars in the largest ten entities run by USGs. 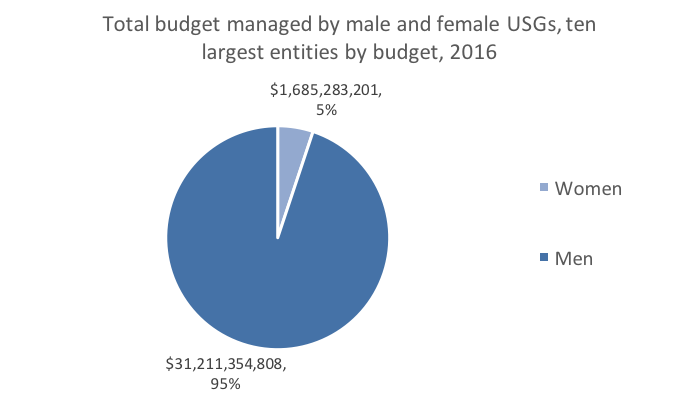 Looking at the Secretary-General’s appointments, we do see a similar pattern emerging—even as he tries to rectify durable imbalances. Among current USGs, Guterres has appointed 15 men and 14 women. That 50/50 split is a positive step, but it ends up being only an incremental gain for women given the fact that current USGs predating Guterres include 54 men and 11 women.

We also analyzed these appointments in relation to the approximate size of the staff complement reporting to them. We found that among current USGs who are sitting at the top of entities or units with at least 20 staff members, 43 of these are men and 17 are women—thus strongly skewed toward male leadership. Guterres’ appointments have reproduced this divide: of the 15 men appointed since the beginning of 2017, 14/15 are heading entities that we estimate to have more than 20 staff; of the 14 women, only 9/14 hold such jobs. Of course, this is just one way to measure it, and there are both men and women who hold influential positions but do not have large staffs. 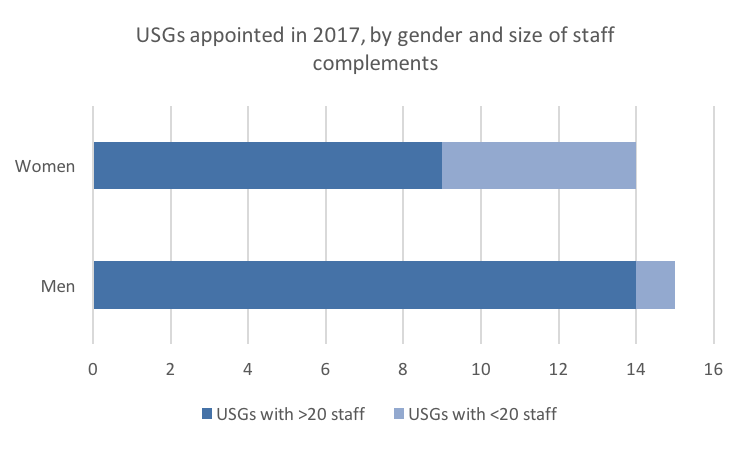 Additionally, the P-5 have not been helping the Secretary-General in this endeavor, as they having been selecting men for the posts that they control: DPA, DPKO, OCHA, DESA, and the Counter-Terrorism Office. (There are other senior P-5 women in the system, but these are the key USG posts.)

Why is this important?

One reason that parity is important is the simple fact that it is a long-standing commitment that has, for the most part, has not been well implemented—even as the UN promotes gender parity as a principle among national governments, for example concerning women’s representation in parliaments and in other political processes. In brief, the UN has little credibility to leverage on the issue.

Another is that, as the report points out, this is a matter of rights—and, in particular, of women achieving substantive equality within the most important multilateral organization in the world.

There is also the business case to be made. This is something which is mentioned in the report, but could be highlighted even more. Of course, even if there were no business case to be made, parity would nonetheless be an important principle for the UN to encourage, adopt, and uphold given its role as a rights and equality leader. Since, however, the track record indicates that gender parity is not seen to be particularly important within the UN, it is high time to raise awareness of the ways that private sector actors are arguing for the necessity of diversity (not just gender, but across a range of spectrums) to effective teams, creativity, and problem-solving.

The UN—and the Secretary-General—have a tough road ahead, but must be credited for their ambition. It’s a courageous agenda.

Ultimately, accountability will be key to incentivizing real change. While there is a section dedicated to accountability for achieving parity, squarely placing that burden on the shoulders of agencies’ leadership, one really has to ask what if anything would really happen if the ambitious targets ultimately are not met. This is because the report does not so much recommend that leaders be held accountable for results—instead, it recommends that leaders hold the people below them to account for results. In this case, it would be important to choose the right leaders in the first place. Are those that are currently in place ready to take on the inevitable political, logistical, and cultural challenges to implementing the report’s recommendations, especially in relation to peace operations? It is unclear what new incentives leaders will have to galvanize change—especially when many leaders have been successfully ignoring the issue for two decades without any consequences.

Finding the right carrots and sticks won’t be easy, especially as this comes at the same time as other major changes in the UN system. And for the moment, the report focuses on carrots such as positive recognition of leaders who are fostering change. Is there a need for more sticks as well, in particular relating to funding? At a minimum, interested member states and donors making voluntary contributions to UN entities should insist on transparency and publication of data on gender parity. Without adequate information to hold leaders to account, we run the risk of finding ourselves another 20 years down the road— with little to show for it, and wondering how we got here.

*Thanks to Ryan Rappa for assistance with data collection and analysis.

Download the full commentary The UN Strategy on Gender Parity. Find more resources and commentary on Multilateral and UN Reform.