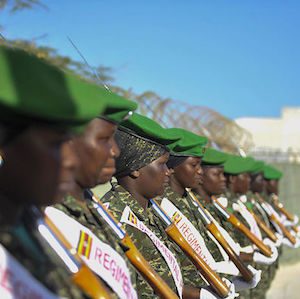 Women in Peace Operations: The Unsung Champions of Human Rights

On 21 March 2016, South Africa celebrates Human Rights Day, commemorating the 1960 shooting of police upon peaceful protestors, which killed 69 people. This year, reflecting on the role of police in relation to human rights seems more relevant than ever given that the African Union (AU) dedicated 2016 to human rights, with a specific focus on the rights of women.

As South Africans reflect on the events of 1960, it would be useful to consider the broader responsibility of police in Africa.

Considering that women are disproportionately affected by conflict, police peacekeepers must be mindful of ensuring that women’s rights, in particular, remain protected. This is especially true for conflict situations where sexual violence against women has become an accepted norm that does not receive due attention. Cases in countries such as Somalia, Sudan (Darfur) and South Sudan are but some examples where these abuses are often not investigated or prosecuted.

Women remain more vulnerable in conflict and post-conflict environments than men. In the Democratic Republic of the Congo, an estimated 25 000 cases of sexual violence against women and children are committed each year. It is in these spaces where police peacekeepers are mandated provide public safety and promote the rule of law.

In conflict and post-conflict environments, security and justice mechanisms are often non-existent or partially operational. In Mali, for example, the police fled from certain areas when fighting broke out in 2013. Police presence is non-existent in Darfur and South Sudan localities such as Korma, Tawilla and Kutum.

Police officers in peace operations offer international legitimacy. They also have an important role in re-establishing the confidence of local communities in the police and the security system. But this needs to happen in a way that takes into account the realities and challenges facing many women. Women are blamed for crimes and have little recourse, which is often compounded by a lack of local female law enforcers.

The vital role of female police officers in peace operations and the promotion of human rights should not be underestimated. Phumzile Mlambo-Ngcuka, the Executive Director of United Nations-Women, said that the most under-used tool for building peace was the meaningful inclusion of women; and that more women in the police and military forces are needed. The United Nations (UN) Police Division, under its Global Effort Plan, aimed to have 20% female officers among police components of global peace operations by 2014. However, female police officers are still underrepresented and make up only 9.6% of those forces.

There is clearly a need to have more women peacekeepers. The importance of women in peace operations has been dealt with in UN Security Council resolutions 1325 (2000), 1888 (2009) and 1889 (2009). In Africa, the AU’s Solemn Declaration on Gender Equality in Africa also calls on member states to increase the participation of women and gender perspectives in peace support operations. These mechanisms all speak to the powerful and influential role of women in creating sustainable peace and highlight that when it comes to conflict resolution, women are an untapped resource.

In addition, UNSC resolutions 1820 (2008) and 2242 (2015) specifically task peacekeepers with preventing and responding to sexual violence and crimes against women and children. UNSC resolution urges for better integration of gender perspectives into peace operations and to double the numbers of women in peace operations by 2019. The High-Level Independent Panel on UN Peace Operations also noted that female personnel play an important role in gaining the trust of women and girls in local communities.

Having more female police officers means communities are better represented and served by the police, and encourages people to report crimes committed against women. Female police officers in peace operations ensure that interaction with the local female population takes place. They also help women and communities gain self-respect and develop livelihood projects, and this establishes a relationship of trust, which assists the implementation of the mission mandate.

The presence of female peacekeepers also empowers local women to enjoy improved access to justice and relevant support. Female police officers serve as role models by ensuring that women are not just seen as victims, but also as providers of safety and security who bring a diverse set of skills and competencies. The presence of women officers can also have a positive impact in supporting gender sensitivity among their male counterparts.

Female police are a critical resource for achieving sustainable peace

The AU and UN need to make a more concerted effort to provide enabling environments for women to join security services, especially the police force. Various UNSC resolutions have focused on increasing participation of women, but strategies to change perceptions or entrenched discriminatory patriarchal attitudes are more elusive.

The call for more women to be involved in peace processes is also complex because it depends on the availability of member state contributions to AU and UN missions. In many instances, women are underrepresented in security sectors in police-contributing countries or are relegated to administrative or support roles. This negatively impacts on their availability for senior positions. Ensuring female police are represented in peace operations requires member states to recruit more women into domestic police forces.

Female police are a critical resource for achieving sustainable peace and ensuring the protection of human rights in local communities. They are the champions for many women in conflict and post-conflict settings to better protect themselves and work towards a more just and peaceful Africa.

Liezelle Kumalo is a Junior Researcher, and Riana Paneras, is a Senior Researcher, within the Peace Operations and Peacebuilding Division of ISS (Institute for Security Studies) Africa

This article was originally published by ISS on March 21, 2016