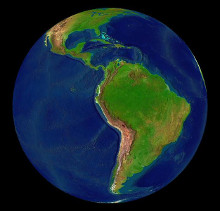 Latin America could emerge as one of the most influential regions in the negotiations on what will follow the Millennium Development Goals when they expire in 2015.

As discussed in the recent UNDP-commissioned, CIC independent report, A Laboratory for Sustainable Development? Latin America, the Caribbean, and the Post-2015 Agenda, Latin America has successfully captured the most important positions in the bodies engaged with the post-2015 framework. This gives the region a unique opportunity to lead and influence the outcome of post-2015 negotiations. Colombia currently presides over the Economic and Social Council, Bolivia is heading up the G77 group of nations, and Antigua and Barbuda will hold the Presidency of the General Assembly until the 69th session. In addition, Brazil currently leads the World Trade Organization; and the COP 20 climate negotiations will take place in Lima, Peru.

Second: The lessons and experience.

Latin America has served as a laboratory for designing and implementing innovative sustainable development approaches. The region has developed some of the best-recognized development programs, combining poverty reduction with social inclusion. Successful cash transfer schemes, such as Brazil’s Bolsa Familia, Mexico’s Oportunidades, and Chile’s Solidario have played an important role in increasing household incomes, raising school enrollment, and reducing malnutrition. And what's more, “these schemes have proven to be affordable (on average they account for less than 1% of GDP), flexible, and responsive to changing conditions and demands, resulting in inclusive growth.” These kinds of policies have helped Latin America reduce the trend of rising global inequality. Though Latin America is still the most unequal region in the world, inequality has decreased even as many other countries (e.g., China and India) face stark increases in inequality.

The success of these policies gives the region credibility to speak about development. Though still a recipient of official development assistance, Latin America has successfully reduced poverty primarily through domestic resource mobilization and social investment. During a period of steady economic growth (due largely to increased global commodity prices), governments prioritized social spending programs and policies that enabled poor households to reduce vulnerabilities through protection mechanisms and decent employment. As a result, according to the World Bank, over 70 million people have been lifted out of poverty and 50 million have joined the middle class between 2003 and 2011 in Latin America and the Caribbean. For the first time, the number of middle class Latin Americans has surpassed the number of those in poverty. Countries across the world - particularly in Africa - are asking what they can learn from the Latin American experience.

All that said, there are several challenges that might prevent the region from capitalizing on its leadership positions, innovative experience, and international credibility. Unlike some other regions, Latin America is riven with internal divisions. Traditionally it has been unable to speak with one voice in global negotiations. Latin America’s countries are divided along an ideological spectrum that ranges from countries in support of market friendly, free trade policies dubbed by some as “neo-liberal” to, on the other end of the spectrum, countries calling for "a new economic system to replace capitalism.” There is a huge difference in the size of the region's economies, levels of development, geography, and resources. This means that the priorities of and challenges faced by Latin American countries are very different, and consensus can sometimes be difficult to reach. While the Community of Latin American and Caribbean States has the potential to coordinate policy, it is relatively new and does not have the necessary mechanisms to develop a common position in the same way as say the African Union. And while there is much talk of solidarity; the region's diversity has meant that Latin American countries have tended to compete as much as they cooperate.

In addition, before 2015 many of these countries will go to the polls. Many leaders will win on tickets dominated by domestic issues, rather than international concerns that resonate less as people struggle with sluggish economic growth. (Latin America grew 2.5% in 2013 compared to 5% prior to the financial crisis.) Unless Latin Americans themselves perceive a benefit from the post-2015 agenda or believe there is something at stake for them (e.g. in the global partnerships agenda), there may be a lack of political leadership.

Either way, one thing is certain: Latin America and the Caribbean matters. Its leadership positions in the bodies working on the new framework, its innovative experience of poverty reduction and social inclusion, and its international credibility mean people will listen to what the region has to say. And its huge diversity means the process it follows to reach a consensus could be a preview of the wider inter-governmental negotiations to come. With developing countries around the world asking what they can learn from Latin America's experience, whether it seizes the opportunity to meaningfully engage in the debate to help shape and steer the negotiations could determine whether the post-2015 agenda is truly transformative.

Talk to us: What lessons from Latin America and the Caribbean can be useful in the future development agenda?