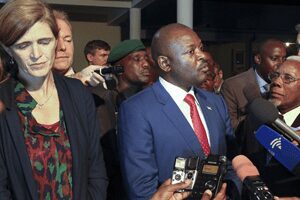 U.N. Security Council Should Make Better Use of ‘Road-Trip Diplomacy’

A United Nations Security Council debate can feel like traveling in an airplane at cruising altitude: a quick continental overflight in a rarefied atmosphere, far above the dirty reality of the conflict below. The debate can be driven by factors that may have little to do with what may be happening on the ground.

But from time to time, council members come back to earth and get dust on their shoes when they engage in road-trip diplomacy. In January members went to Burundi; this month they were in West Africa.

Firsthand fact-finding has not always been the body’s first instinct. As the Security Council Report (SCR) noted in its March monthly forecast, the council’s first visit to the field was to Vietnam and Cambodia in 1964. But only after the Cold War ended did Security Council missions take off, with some 51 visits to 45 countries and territories in the period since. Through January 2016, the Democratic Republic of the Congo held the record with 12 visits; Burundi was second with nine.

Some think this is a habit that should be encouraged. Last year’s reports on U.N. peace operations and peacebuilding urged the council to change its ways. The High-Level Independent Panel on Peace Operations lamented that the council was too aloof, leaving early engagement to the Secretariat. It urged its members to visit “turbulent areas” and consult regional stakeholders on emerging conflicts.

While talk of Security Council “reform” often focuses on who sits at the top table in its meetings and the use of the veto by its five permanent members, altering its working methods are what Liechtenstein’s U.N. Ambassador Christian Wenaweser has called the “ugly duckling of Security Council reform.” Support for such incremental adjustments is a realist argument for behavioral and not institutional change.

But if improving council initiatives like field visits is a near-term objective, it is worth looking more closely at how such visits work. Dispatches from the field by SCR’s correspondents describe crowded agendas full of meetings with local political leaders past and present, U.N. envoys, mission chiefs, regional offices heads and country teams. The schedule includes checking in with opposition figures and NGO representatives.

In Burundi in January, the delegation traveled to a presidential facility in the town of Gitega to meet with President Pierre Nkurunziza. Nkurunziza’s decision to run for a disputed third term last year in an election he went on to win had triggered a constitutional crisis and subsequent violence, leading the African Union to mandate the African Prevention and Protection Mission in Burundi.

If improving council initiatives like field visits is a near-term objective, it is worth looking more closely at how such visits work.

Nkurunziza’s reaction was to shoot the messenger: He told council members the situation in Burundi was much better than reported in the media. Standing next to the president, U.S. Ambassador to the U.N. Samantha Power looked forlorn. The Financial Times reported her as saying that “we did not achieve as much, frankly, as I think we would have liked.”

Despite the frustrations and modest return, Congo Research Group’s director, Jason Stearns, who follows the region closely, told me he believed such visits are important, even if only for symbolic reasons. They refocus the international spotlight on forgotten countries and conflicts; they put pressure on reluctant authorities to move toward some sort of peace process.

“To have the author of ‘A Problem from Hell’ in your country makes news,” he said, referring to Power’s Pulitzer Prize-winning book about America’s response to genocides, written while she was still a professor at Harvard University.

But Stearns admits that local analysts find it hard to discern any lasting impact once the wheels have gone up on the council’s plane. In Burundi, South Africa is still disengaged, and the permanent members of the Security Council remain divided on a common approach; the African Union leadership is still reluctant to make a forced intervention.

One criticism of council visits is that they take too long to arrange. They become bound in protocol, and less effective as a result. They are also getting shorter. The U.N. Multidimensional Integrated Stabilization Mission in Mali (MINUSMA) is as complex as its name suggests, but the council visitors only spent two days in Mali.

The council has not always been so hesitant. In September 1999, proxies for the Indonesian military in East Timor went on a violent rampage after voters in a U.N.-sponsored referendum rejected an offer of autonomy in favor of independence. The council made the decision to go to Jakarta, and then departed on the same day.

The field mission, and in particular the delegation’s willingness to challenge the Indonesian military’s narrative of events on East Timor, was an integral part of a broad international effort to address the crisis. Importantly, the five permanent members were on the same page. So was then-U.N. Secretary-General Kofi Annan, who, while the delegation met with the head of the Indonesian military, declared, “The time has clearly come for Indonesia to seek help from the international community in fulfilling its responsibility to bring order and security to the people of East Timor.”

The visiting mission cabled back their analysis before the Security Council met in open session. Member states then lined up to condemn Indonesia for failing to keep the peace and called on Jakarta to accept an international mission. The country was caught by surprise.

“Nobody, including myself, had ever imagined that the problem of East Timor would eventually develop in such a way so as to become part of a global issue and portrayed to the international community as a tragic humanitarian drama,” the head of the Indonesian military at the time, Wiranto, wrote in his autobiography “Witness in the Storm.” “And as such, it was necessary to bring in some kind of multinational force in order to stop it.”

The Security Council’s mission played a pivotal role in bearing witness to the tragedy. Its members were back in New York on Sept. 15, where they mandated and deployed a multinational force to restore order. Five days later it had deployed, in record time.

Wiranto now has to be careful where he flies. His 2003 indictment for crimes against humanity by a U.N.-backed tribunal for his role in the East Timor violence in 1999 still stands, as does a warrant for his arrest.

Security Council members have no such travel restrictions. They are free to roam. And when they visit trouble spots like Burundi, they should remember the 1999 mission to East Timor and the dramatic diplomatic impact it had. They should be encouraged to fly more frequently, so that their traveler’s tales can improve the quality and weight of their deliberations.

Editor’s note: Guest columnist Jim Della-Giacoma is filling in for Richard Gowan, who is on leave until early April.

This article was originally published by World Politics Review on March 21, 2016

Jim Della-Giacoma is the deputy director at the Center on International Cooperation at New York University, the editor-in-chief of the Global Peace Operations Review, and a visiting fellow in the department of social and political change at the Australian National University’s College of Asia and the Pacific.