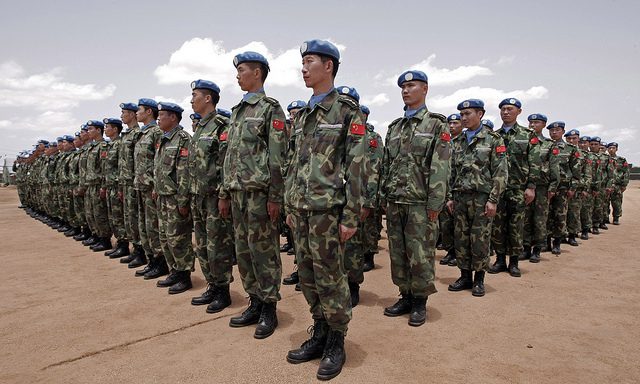 A decade ago, there were some critics ready to predict a downturn in international peace operations. The start of the 21st century had seen a return of peacekeeping from East Timor to Liberia, but critics saw this as a temporary phenomenon. The first Annual Review of Global Peace Operations published in 2006 wasn’t the product of one of the skeptics. ‘There is every reason to believe that the demand for effective peacekeeping will rise, not shrink, in the years ahead,’ it predicted. It shouldn’t be a surprise, then, that the latest findings show peace operations continue to surge even as NATO and its allies—including Australia—withdraw from Afghanistan. In a world of intractable conflicts and limited good options, peacekeeping is still a valuable strategic tool.

The report of the UN Secretary-General’s High Level Panel on peace operations—Uniting Our Strengths for Peace, released on 17 June argues for the primacy of politics, more responsive operations, stronger partnerships, and missions that are field-focused and people-centered. While not as revolutionary as August 2000 Brahimi Report, this ‘insiders’ document’ does propose some new ideas for old problems as well as contain a long list of technocratic fixes.

As the Annual Review migrates online to become the Global Peace Operations Review, the latest data shows that UN deployments have grown by 8% in 2013 and 2014 to involve more than 100,000 soldiers and police. The number of personnel deployed by other regional organisations, especially in Africa, leapt by 60%.

The first edition of the Review of Political Missions in 2010 was recognition of the value of ‘blue suits’ in resolving conflicts, which are always political problems before they turn violent. Civilian crisis management operations, it said, ‘are a diverse tool, and demand for them is likely to increase’.

The reviews published over the last decade weren’t crystal-ball gazing. They gathered data from the statistics visible in the rear view mirror of history. They didn’t foresee the turmoil resulting from end of the Gaddafi regime, state fragility in West Africa, or civil wars in Syria and Yemen.

But looking backwards, the pattern of special political missions has been clear: where there’s war, there will be peacemakers—even if those are battlegrounds where armed peacekeepers fear to tread. By this metric, more peacemakers demonstrate that conflict is on the rise and are more numerous now than those of 2005. NATO’s drawdown has also restored the UN as the leader in peace operations. Compared to most regional groupings, the UN is more capable of mobilising and managing the deployment of multinational forces.

A decade on from when Australian troops packed up from the Timor–Indonesia border, peacekeeping has also evolved. In Liberia, peacekeepers were recently deployed to help combat Ebola. There are new doctrines; such as one covering the protection of civilians, and old debates; such as the limits of the use of force, especially surrounding the Force Intervention Brigade (FIB) in the DRC.

Such innovations court controversy. To many, the new tasks look like mission creep. In DRC, unarmed drones have been deployed to conduct surveillance, raising issues of invasion of privacy. In the Mali mission, Netherlands signalers have eavesdropped on the phone calls of armed groups, special forces have conducted long range patrols, and Apache attack helicopters have prowled the skies. Interventions like this come close to a red line for some member states. The last thing they want is to empower overly aggressive UN missions or ones that might spy on them.

Robust UN missions are seen as effective but are hard to sustain. Key troop contributors, especially the South Asian countries that form the backbone of UN peace operations, are reluctant to sign up for such duties.

New Asian contributors are increasingly filling the blue helmets’ ranks, but they share similar reservations. China started slowly, but has now deployed its first combat battalion in South Sudan. Indonesia has pledged to become a top-ten contributing country by more than doubling its current contribution to 4,000 personnel by 2019, but worries the FIB might be ‘seen as a party to the conflict and perceived partial’. It is a delicate line to walk and probably can only really be avoided by UN peacekeeping operations avoiding robust mandates. Panel chairman Jose Ramos Horta said that enforcement tasks, like those given to the UN in Somalia in 1993 and in DRC in 2003, must be ‘exceptional’ and ‘implemented with extreme caution’.

But despite such additions, there’s still a deployment gap. UN missions mostly struggle to reach mandated strength. Where this isn’t so much a problem, such as in UN Interim Force in Lebanon (UNIFIL), it’s because there’s a diversity of contributors, especially from Europe, but also from peacekeeping aspirants like Indonesia.

Some small European countries, such as Ireland, are proud of their tradition of UN peacekeeping. In 1997, two-thirds of Irish soldiers had served on UN peacekeeping operations—70% of these more than once. But US ambassador to the UN Samantha Power has argued that all European nations must do more. It’s a message that should be heard in Australia too.

UN deployments aren’t a distraction from NATO’s core mandate, Power says. On the contrary, they add to collective security. Perhaps, inadvertently, she also explained why they endure and the UN Security Council turns to them when ‘something must be done’.

‘Blue helmets carry the unique legitimacy of having 193 Member States behind them – from the global North and South alike,’ she said. This mattered when Australian forces went to Timor in 1999: it meant InterFET wasn’t an invasion and UNTAET not an occupation. They were missions to enforce and support peace of behalf of all nations. In some fights, it pays to have the world on your side.

Jim Della-Giacoma is the Deputy Director of the Center on International Cooperation. | Twitter: @jimdella