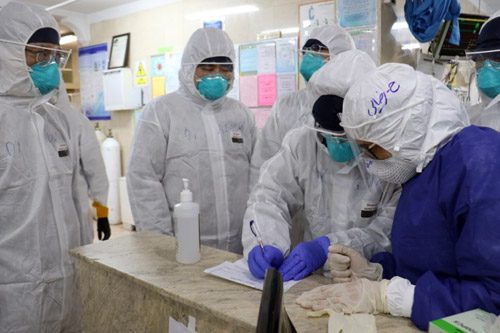 The Coronavirus Risk to the Afghan Peace Process

The novel coronavirus pandemic poses widespread risks to public health and economic stability around the world—but it also has particularly worrying implications for the recent progress towards ending the decades-long conflict in Afghanistan.

The pandemic will greatly complicate efforts to overcome the already significant obstacles to the implementation of the Afghan peace process foreseen in the February 29 agreement between the United States and the Taliban. The prevalence of the virus in Afghanistan is still unknown, given the weakness of healthcare systems and the lack of testing. On March 10, the Ministry of Public Health said that there 7 confirmed cases—5 cases in Herat and 2 in Samangan—plus 60 suspected cases.

The pandemic seems likely to spread quickly from both Iran and Pakistan into Afghanistan. All of the known cases are related to Iran—with which Afghanistan has a 572-mile largely unmonitored border, and where more than 10,000 coronavirus cases have been recorded and over 300 have died, making it the fourth-most-affected country after China, South Korea, and Italy. The Ministry of Refugees said that some 50,000 people have returned from Iran to Afghanistan over the past two weeks, and it is likely that more cases of transmission have occured among them. An activist tweeted from Herat that 10,096 Afghans returned from Iran on March 10 with no screening. Afghanistan also has a 1,510-mile long border with Pakistan, which is at risk because of the weakness of its public health system, its 596-mile-long border with Iran, and the China-Pakistan Economic Corridor, which has brought tens of thousands of Chinese citizens into Pakistan. There are millions of Afghan refugees in Pakistan, as well as extensive cross-border traffic of nomads, traders, smugglers, and armed groups.

The pandemic would pose a nearly insuperable problem for a country at peace, let alone one struggling to end a prolonged conflict. The implementation of a complex and challenging peace plan will become even more difficult, as several elements of the peace process are likely to be affected by efforts to contain the spread of coronavirus.

For example, the US-Taliban agreement includes provisions for the release of up to 5,000 Taliban prisoners held by the Afghan government and up to 1,000 detainees held by the Taliban. Much of the Afghan public fears that released prisoners will rejoin the Taliban. But detention centers also pose risks of contagion. Iranian authorities have temporarily freed about 70,000 prisoners to help limit the spread of the coronavirus. Public health considerations might increase pressure for prisoner releases in Afghanistan.

There are compelling public health arguments to end hostilities. To prevent the spread of the pandemic, all forces should observe a ceasefire in place and confine themselves to quarters, or even disband and return home, since concentrations of people pose risks of contagion. The resumption of offensive actions after the end of the pre-February 29 reduction in violence poses a risk of renewed escalation that threatens both the peace process and public health. Movements of both armed men and victimized populations are likely to spread disease further.

The US-Taliban agreement was signed on February 29 in Doha in the presence of hundreds of diplomats, journalists, and other witnesses and observers from dozens of countries throughout the world, a type of event that is now impossible to hold for the foreseeable future. The restrictions on movement and large gatherings will pose difficulties to the next step of the peace process, convening intra-Afghan negotiations. Qatar and the Taliban have advocated holding the negotiations in Doha. But will Qatar still welcome a delegation from Afghanistan, plus hundreds of journalists, under these circumstances?

The Taliban political office has advocated negotiations in a succession of countries: Qatar, Norway, Indonesia, Germany, and Uzbekistan. Such a road show is now impossible. The main possible venue is Norway, where authorities have banned gatherings of 500 or more people. It will be difficult to bring to Oslo delegates from Kabul, Taliban representatives from Doha and Pakistan, and representatives of other relevant states, including China, Pakistan, and Iran. Plans for informal Afghan “dialogues” in Germany, Uzbekistan, China, or Indonesia will also have to be shelved.

The pandemic makes it even more important to end the war. The virus makes no political, national, religious, or sectarian distinctions. But the measures to control the spread of the pandemic will make it even more difficult to build on the recent steps towards progress on a peace settlement. We call on all parties to the conflict in Afghanistan to unconditionally cease hostilities, release detainees, and guarantee secure passage to all medical supplies and personnel in order to focus all efforts on protecting the population from the coronavirus. Such steps will also help keep the peace process from becoming another victim of the coronavirus pandemic.

Previous versions of this article were published in TOLOnews and Responsible Statecraft.