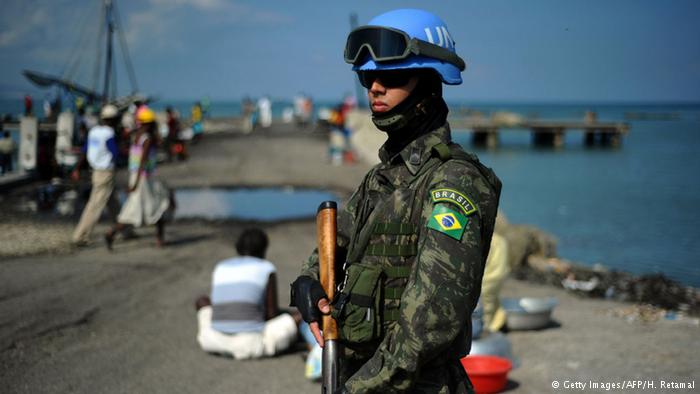 Germany and its European allies are overburdened with problems ranging from the Greek crisis to the Ukrainian conflict. It is understandable that strengthening United Nations peace operations in remote trouble spots such as Côte d’Ivoire and Sudan is not very high up their agendas. But there are growing calls for European powers, and Germany in particular, to consider offering the UN more troops and military assets. These calls don’t just come from inveterate peaceniks and lovers of the UN.

Earlier this month, a commission led by former German Defense Minister Volker Rühe published a report on German military deployments. The focus of the report is parliamentary oversight of the Bundeswehr. But it also raises concerns about the growing demands on UN operations. The UN has over 100,000 troops in missions worldwide. Most come from Africa and South Asia, and many lack advanced military equipment. This has been a major problem in places such as Mali and on the Golan Heights, where Islamist extremists have targeted the UN, killing peacekeepers or taking them hostage. If European governments want the UN to limit the rise of chaos in North Africa and the Middle East, it needs reinforcements.

The Rühe Commission predicts “the United Nations’ need for high-value military capabilities will tend to rise further.” It calls for a serious strategic debate on whether and how Germany should offer more forces to the UN. Similar debates are underway in other parts of Europe. The Netherlands and Nordic countries have already contributed intelligence officers, attack helicopters and transport aircraft to the UN mission in Mali. Britain is also exploring ways that it can do more for the UN.

Germany has itself experimented with new ways of supporting peacekeeping. It only has 200 personnel, including soldiers and police, on UN service. But it has also sent transport aircraft to Mali and established a field hospital near the capital, Bamako, as part of a small European Union mission operating alongside the UN.

“Not pulling their weight”

Yet, as the Global Peace Operations Review, a new online survey of UN and non-UN missions launched by the Center on International Cooperation this week, notes, many European militaries are still “not pulling their weight” in peacekeeping after Afghanistan. No NATO country figures among the top 25 contributors of personnel to blue helmet missions (Italy is number 26). European governments pay 40 percent of the costs of UN deployments – and nearly 100 percent of African Union operations such as the stabilization force in Somalia – but they could significantly boost these missions by offering their own drones, engineers, medical teams and other specialized assets.

Last week, the UN released a report by a high-level panel on peace operations that emphasizes that “it is crucial to reverse the decline in contributions from many high-capability countries.” It is of course not surprising that a UN-backed panel should ask for more resources for UN missions. But other players, including the Obama administration, are also putting pressure on Europeans to raise their game.

Washington has been shocked by the UN’s inability to handle crises like the rapid collapse of South Sudan in 2013, and angered by repeated reports that peacekeepers have failed to protect imperiled civilians in places like Darfur and the Democratic Republic of Congo. But, conscious that there are often few alternatives to blue helmet missions, President Barack Obama and his team have made strengthening the UN a priority for his final period in office. It hardly ranks alongside securing a nuclear deal with Iran, but the US is still investing political capital in the issue.

Last September, Vice President Joe Biden convened a summit in New York to encourage capable countries to boost their contributions to the UN. This September, Obama will host another meeting on the same theme. In a speech in Brussels previewing the summit earlier this year, US Ambassador to the UN Samantha Power praised the Dutch-led effort in Mali but lamented “the reality that European countries have drawn back from peacekeeping.”

Strikingly, Power argued that European countries should not see UN peacekeeping as purely humanitarian endeavor or a “soft” alternative to NATO operations, but as part of the broader picture of transatlantic burden sharing. If Germany and its allies want continued American assistance in securing their eastern flank from renewed threats from Russia, they can surely do more to help stabilize Europe’s southern flank through relatively light weight and low cost UN peacekeeping deployments.

This may make sense strategically, but it is still hard to persuade many European generals and politicians to take UN deployments seriously. The legacy of the disastrous missions in the Balkans and Rwanda remains strong. Even those European countries, such as Ireland, which have kept up their contributions to the UN over the years have long lists of complaints about the organization. A recent survey of Irish officers by Edward Burke and Jonathan Marley found that most see UN command and control systems as inefficient, peacekeeping force structures as outdated and UN doctrines as inferior to those of NATO and the European Union.

If European nations want to deploy more peacekeepers they will have to work through, or work around, these problems with the UN. It is possible to overcome such obstacles, even if it is not always easy. The Dutch-Nordic intelligence effort in Mali follows a NATO model, for example, as there is no UN template for such a unit.

But if countries like Germany want to have a strategic debate about their future role in UN peace operations, they should not get too bogged down in technicalities. The real question that faces them is whether they believe, in an increasingly unstable international environment, UN operations can make a credible contribution to their own security. Conflict zones like Mali and the Golan may not pose direct threats to German security, but instability in Africa and the Middle East is also linked to international terrorism, organized crime and uncontrolled migration flows. If Germany and its allies want to live in a stable neighborhood, UN missions can be part of the answer, and European militaries need to do more to make them succeed.