The Role of Peace and Security in the Post-2015 Agenda: The Perspective of African States and LDCs 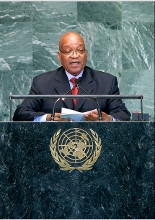 It is widely accepted that development cannot occur without peace, nor peace without development. Yet whether and how to include building stable societies in the post-2015 development agenda , as recommended by the High-level Panel on the Post-2015 Development Agenda, remains a question.

Numerous global institutions and world leaders, including those from African states and least developed countries (LDCs), have highlighted the linkages between peace and development:

As these examples demonstrate and as I’ve written in Black Star News, global actors, especially African states and LDCs, recognize “that without peace, development won’t occur. Accordingly, every effort should be made to create stable societies with governments that are democratic, transparent, participatory and accountable to the people and observe human rights and freedoms and the rule of law.”

Some actors have expressed legitimate concerns that focusing on ensuring peaceful societies and effective institutions will detract from the developmental focus of the post-2015 agenda. Indeed, it is an expansive agenda with numerous competing imperatives in relation to the economic, social and environmental pillars of sustainable development. The challenges posed by such an expansive agenda understandably raise concerns related to the possible trade-offs among issues. Nowhere is this more apparent than in the broader debate about the means of implementation.

Furthermore, many countries feel that the way in which peace is being discussed in the post-2015 agenda is prescriptive by Western powers, rather than building upon the experiences and efforts of LDCs. There is great concern among a number of LDCs about the inclusion of a punitive and securitized approach to ‘fragile states,’ particularly in light of the current debates regarding the International Criminal Court and the role of international justice.

These are persistent questions that will only become more challenging as the discussions in the Open Working Group and subsequent negotiations on the future development agenda progress. World leaders and institutions have acknowledged the link between peace and development. Now we must move beyond that acknowledgement and reflect on the past experience of countries in special situations to build an effective means of implementation into the post-2015 framework.

Above all the lessons and perspectives of LDCs and African states must be heard for the post-2015 agenda to respond to the needs of the people in the least developed countries who are being left behind.

World Bank Group President Jim Yong Kim and UN Secretary-General Ban Ki-moon made a joint visit to Africa's Sahel region from November 4-7 to draw attention to the economic and security challenges facing the highly vulnerable region and to hear first-hand from Sahelian leaders how the international community can better coordinate to provide increased support.