The Role of the BRICS in Changing Global Governance: A Case Study of the Post-2015 Development Negotiations

Julieta Merlo visited NYU CIC from the Universidad de Chile for 3 months in 2014 to research the role of the BRICS in shaping the post-2015 development agenda. In this blog, she summarizes her findings.

We live in a multipolar world…

We are in the midst of the most significant era of change to the international order since the end of World War II. An international system once dominated by the great powers of 1945 is giving way to a multipolar world. The BRICS (Brazil, Russia, India, China and South Africa), as well as a ‘second economic tier’ of MINTs (Mexico, Indonesia, Nigeria and Turkey), have achieved historically unprecedented rates of poverty eradication and growth. This graph demonstrates the steady expansion of the BRICS share of global GDP (IMF): 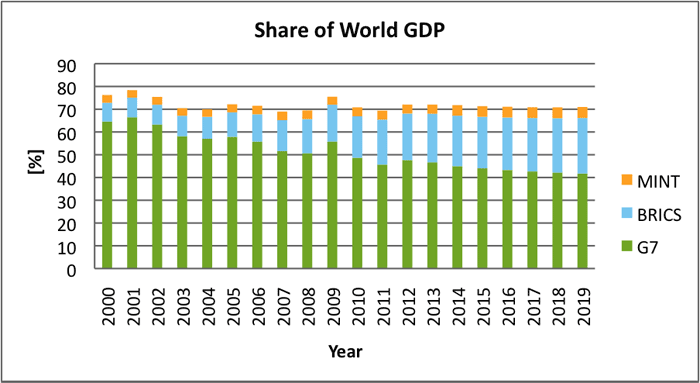 The established structures of global governance appear more inadequate than ever to confront contemporary global priorities – not least on climate change, recovering from the aftermath of financial crisis and restoring governmental legitimacy.  And they appear to be more dated than ever, marginalizing or failing to include some of the world’s major economic, political and military powers.

The UN has lagged far behind in adaptation. Its institutions have little clout with which to act on questions of sustainable development. Most of the world’s major economic and finance ministries and the private sector do not interact with the UN’s Economic and Social Council (ECOSOC). The United Nations Framework Convention on Climate Change (UNFCCC) hasn’t yet been able to bring about significant change in climate policies.

Meanwhile, the BRICS ambitions and place on the world stage have grown. South-South development cooperation has been on the rise for more than a decade. For example, China now exceeds the OECD’s investments in many developing countries, Brazil’s South-South and triangular cooperation is growing. But the UN and wider global development system remains dominated by traditional donors, even though UNDP has called for inclusion of emerging economies in “A renewed global partnership for development.“

The BRICS are helping to reshape global development priorities…

Brazil has perhaps fought most vigorously for a re-energized and more inclusive UN development effort that can facilitate continued global strides in poverty eradication without surpassing planetary boundaries. The Rio +20 Conference on Sustainable Development mandated countries to negotiate a universal development agenda based on three pillars of economic, social and environmental development. Over 2014, a UN Open Working Group (OWG) was mandated by Rio+20 to carve out new Sustainable Development Goals (SDGs) and targets to replace the Millennium Development Goals (MDGs) when they expire in 2015.

Throughout 2014, the BRICS did not negotiate as a group (they negotiated as part of the G77 + China bloc), delivering both individual statements and joint declarations with other countries. However, my analysis of their statements revealed that the BRICS negotiation efforts did converge on a set of common principles and priorities.

In addition to a well-established commitment by the G77 + China to national sovereignty and to poverty eradication, the BRICS placed a particular emphasis on two new principles for global development:

1.Universality. The SDGs will apply to all countries and people. This is very different to the MDGs, which focused on developing countries. This is a huge paradigm shift from a framework that was about aid from the richest to the poorest countries for poverty eradication, to a universal approach to achieving and measuring development everywhere.

My analysis also revealed common BRICS interests and priorities in agriculture, technology and energy, and in re-casting gender and peaceful societies discourses.

Agriculture. The BRICS’ key grievance remains US and EU agricultural subsidies, which curb international trade and agro-export sector growth in developing countries. The G77 pushed hard for SDG target 2.b, which aims to, “Correct and prevent trade restrictions and distortions in world agricultural markets, including through the parallel elimination of all forms of agricultural export subsidies and all export measures with equivalent effect.” The recognition of the need to end the subsidies in developed countries is a great achievement for the G77 + China, and one that they are likely to keep referring back to in future trade rounds of trade talks.

Technology. Scaling up technology transfer was a major message from the BRICS and other middle-income countries. It was incorporated extensively into the SDG agenda, including:

These targets are of mutual interest to the BRICS and least developed countries. Achieving them will require the BRICS to be major facilitators of technological transfers, as they are already doing, for example through initiatives such as Brazil’s ARV production facilities in Africa. The BRICS also stand to benefit from technological transfers (which India and South Africa emphasized heavily) if they can clarify and pursue a package of priorities in this area. Achieving the BRICS’ development ambitions is likely to involve international debate on patents, intellectual property rights and updating the rules of the game for important areas of pharmaceutical and other scientific research, as well as as developed country investment in areas such as energy.

Energy. The BRICS invoke the CBDR principle to expanding energy sources and consumption as they do not want new conditions that hamper developing countries’ growth. In the negotiations, the BRICS emphasized access to energy for all (India placed special emphasis on this subject). Achieving access to energy for all will require a major uplift in investment and infrastructure. The BRICS stressed the need for developed countries to invest in the energy issue because of its existing resources and technology.

Expanding gender equality is also a subject of great importance to the BRICS – minus Russia. However, they bring different perspectives. The OWG managed to incorporate both targets for equal opportunity, such as access to health, education, loans, etc. which are defended by emerging powers, alongside political participation and rights for women which preoccupied Western countries in the negotiations. For example, SDG 4 promotes equitable and inclusive quality education for boys and girls. SDG 5 promotes the empowerment of women and girls, ending discrimination, as well as harmful practices such as FGM and child marriage.

The empowerment of women is a profound change in the global development policies of countries like China and India. In order not to undermine sovereignty (a red line of the BRICS) the SDG targets are caveated with "in accordance with national laws.”

Developmental approaches to achieving peaceful and inclusive societies for sustainable development. The peaceful and inclusive societies goal – SDG 16 – was contentious during the OWG but was incorporated in the agenda through compromise. Brazil was especially concerned with differentiating between conflict and violence. Conflict can merit international action through the Security Council. Violence, on the other hand, is the result of individual actions and the solutions are domestic - achieving public safety through national laws and institutions. Brazil proposed as a solution the incorporation of access to justice for all. This leaves room for states to pursue progressive and developmental policies for achieving peaceful societies, without imposing an external model of justice or inviting the securitization of development through the Security Council. This formulation also addressed the concern of the non-aligned countries and China. They defended the idea that the conditions for peace are the responsibility of each government.

International rule of law and governance itself was defended by the BRICS. This was their opportunity to include in the agenda the need for a more equitable and representative global governance system. SDG targets 16.6, 16.7, and 16.8 reflect these interests, advocating for more transparent institutions, decision-making processes that are more inclusive, participatory and representative, and strengthening the participation of developing countries in global governance institutions.

The New Development Bank created by the BRICS is another major way they will reshape global governance and development in the post-2015 development era. The bank was institutionalized in July 2014, with US$ 100 billion in initial authorized capital. This New Bank will shake up the international financing order for development, and potentially the Washington Consensus too – along with the creation of the Asia Infrastructure Investment Bank.  The Bank agreement states that their funds will be destined to infrastructure and sustainable developments plans in emerging countries and developing economies, supporting private and public projects and providing technical assistance.

Beyond this, we know very little about the BRICS’ plans for the Bank. The third International Conference on Financing for Development in Addis Ababa in July 2015 would be a major opportunity for the BRICS to publicize their growing clout and influence on the international development stage.