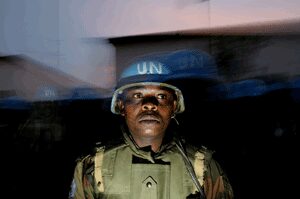 The UN Wants to Respond to Climate Change and Prevent Conflict, But When?

Climate change, civil conflict, and violent extremism are among the most significant threats to global human development, peace, and security. UN-led plans to address all three require immediate action to prevent future crises, yet crucial investments may not yield tangible results for years to come—well beyond democratic term limits.

If implemented in earnest, climate action and conflict prevention plans function along multi-year timelines, with some targets set over a decade in the future. These plans require governments to prioritize long-term peace, accept short-term costs, and effectively manage regressive domestic pressures.

This temporal recognition is central to emerging UN-led conflict prevention. Yet, similar to climate action, other plans remain plagued by the challenge of getting governments to invest for future outcomes, which may be difficult to quantify before the next election.

Just over a year ago, in April 2016, the UN Security Council and General Assembly adopted a resolution agreeing to the principle of “sustaining peace.” The resolution recognizes that by addressing potential sources of instability before they become violent crises the UN may build societies that remain peaceful for the long-term.

It’s part of what diplomats have called a “mindset shift” within the UN on when to build peace. But much like climate action, governments are faced with the short-term costs of implementation.

Known as a “rapid response mechanism,” the United Nations Peacebuilding Support Office (PBSO) is charged with administering small but targeted investments to prevent conflict around the world.

Their initiatives have included supplying police to calm violence in the Central African Republic, and supporting the demobilization of child soldiers in Myanmar. In the face of geopolitical inertia, the PBSO is working to activate the principle of “sustaining peace” through quick and pointed projects to prevent escalation of political violence and other threats to peace.

Financed through contributions to the Peacebuilding Fund, diplomats have praised the PBSO’s work. Government’s financial commitments, however, have so far not matched the positive rhetoric.

Countries’ pledges during a financing conference last September only amounted to just over half of the Peacebuilding Fund’s $300 million goal. Moreover, the roughly $152 million is scheduled to be delivered over four years, meaning certain portions are only expected for 2019.

While Germany, Switzerland, and several additional donors have since contributed a further $11.7 million, Marc-André Franche, Chief of the PBSO’s Financing for Peacebuilding Branch, told me the funding gap remains significant.

The usefulness of force

While UN member states have not yet reconciled short-term investment to sustain peace, plans to address another emerging threat to global peace—violent extremism—face a similar problem.

In recent years, a growing body of research has shown that forceful security responses may be counterproductive for preventing violent extremism, potentially increasing persuasiveness of extremist propaganda and recruitment.

During an event on preventing violent extremism last December, Michelle Breslauer, Program Director for US Operations at the Institute for Economics and Peace, cited increased terrorism following the 2003 US invasion of Iraq and the beginning of the Syrian Civil War as evidence that military interventions are increasing rather than reducing terrorist activity.

“The [largely military] strategies that we have had to date, and that includes the two previous US administrations, aren’t really working, Breslauer continued. “There isn’t that kind of quick fix.”

In response, new strategies have emerged prioritizing prevention through the construction of more inclusive communities. Instead of relying solely on repressive measures, fresh strategies seek to build local sources of resilience to violent extremism. Similar to climate action and sustaining peace, these require certain defiance of short-term political incentives in favour of long-term peace.

Beneath the tactical differences between forceful counterterrorism and community building lies a fundamental distinction of timeline. Security service responses often operate in the short-term, grounded in the perceived need for immediate, reactive action.

With differences in how to prevent violent extremism come fundamental questions of when.

The Paris Agreement and SDGs, along with sustaining peace resolution and the evolution in thinking around violent extremism indicate growing global acknowledgement of the value of strategic forethought. Yet, acceptance of the timeframes for implementation of these UN-led plans for conflict prevention remains a political challenge. This may be due to prevention’s frustrating counterfactual. How does one know if something was prevented?

Politicians want to see short-term returns on their investments to stay in office, and it is difficult to deliver measurable success to voters when a positive outcome may be that nothing happens, or that results are only apparent years in the future. When political leadership prioritizes quick victories between elections and an electorate calls for demonstrable security, why invest in long-term agendas with outcomes that are difficult to quantify, sometime in the future?

The UN Secretary General Antonio Guterres has reaffirmed conflict prevention and sustaining peace as “the priority” for the institution, acknowledging the “exacerbating” role of climate change. But governments’ commitment to plans’ investment for long-term outcomes will require recognition of mutual interests among major powers and management of perverse political pressures.

Despite a global trend of inward-facing populism, countries will need to come together, engage in honest reflection, and focus on creating the political conditions to actualize these plans for peace. Without political commitment to match UN-led plans’ strategic timeframes, economic investments in climate action and sustaining peace risk being undermined.

UN conflict prevention plans for climate action, sustaining peace, and preventing violent extremism involve a temporal shift, which requires honest reflection on tensions between long-term planning and short-term action. Recognizing when plans need to be implemented will be critical to their success.

This article was originally published on June 8 2017 by A New Climate For Peace.

Johnathan Rozen is an independent researcher and writer based in Toronto | Twitter: @rozen_jonathan