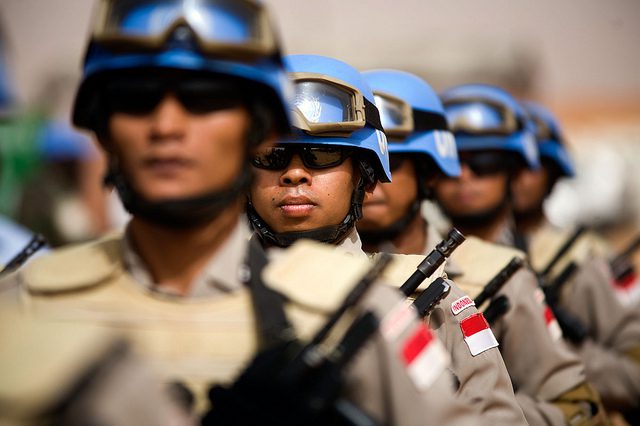 Indonesia is committed to becoming one of the top ten countries contributing to UN peace operations. With its Roadmap Vision 4,000 Peacekeepers, Jakarta aims to dramatically increase the 2,724 peacekeepers now deployed in ten UN missions by 2019.

Compared to 2014, this would be a doubling of troops deployed in only five years. This is a noble and ambitious goal of international good citizenship, but what will be the challenges on this journey?

Last month a panel of experts chaired by Nobel laureate and former Timor-Leste president Jose Ramos Horta gave a few hints when it laid out an ambitious vision about how to bring the organization’s peace operations into the 21st century.

Commissioned by the outgoing UN Secretary-General Ban Ki-moon as a legacy project, Uniting Our Strengths for Peace issues a challenge to the Security Council and member states to change the way peace operations are conducted.

The panel argued for four shifts in UN peace operations.

First, it made the case for the primacy of politics in peace operations, which include peacekeeping, special political missions, and the mandating of envoys.

Second, it said these missions needed to be more flexible in responding to the situation on the ground, including deploying more quickly. Indonesia’s bold commitment could help this.

Third, the UN needs to be a better partner to other organizations, sometimes acting as much an enabler as an implementer. Finally, the UN Secretariat need to be change the way it administers peace missions to be more field-focused and people-centered.

The proliferation of peace operations shows they have value as a strategic tool, especially in those situations where something must be done but in the face of competing national interests nobody quite knows what to do. After the drawdown of NATO forces from Afghanistan, the United Nations is the go to organization deploying the largest number of troops and police to global hotspots — more than 120,000 uniformed and civilian personnel serve under the blue flag in 39 missions.

But as Indonesia prepares to host the Asia-Pacific Regional Peacekeeping Meeting in Jakarta on July 27-28 policymakers should study closely Uniting for Peace.

In it, they may find some positions that are close to their own. In other cases, the panel has set out to confront those who mandate, pay for, and supply personnel to peace operations.

In a public address at the UN in New York in February, Indonesia’s Deputy Permanent Representative Ambassador Muhammad Anshor expressed hope that the panel would provide some viable solutions to current challenges. He recognized mandates are becoming more complex and multi-dimensional, such as the deployment of the Force Intervention Brigade in the UN Mission in the Democratic Republic of Congo (MONUSCO).

“While the Brigade has been seen as an effective element in neutralizing armed groups, there are risks whereby MONUSCO is seen as a party to the conflict and perceived partial. This has undermined the credibility of the mission, and might be harmful to future peacekeeping and other related UN overtures there as well,” Ambassador Anshor remarked.

The last major review of peace operations was the Brahimi report of August 2000 and it focused on the UN’s ability to credibly project force. The latest panel has deliberated after a decade and a half where military force has been vigorously applied in Afghanistan, Iraq and Libya but has lead to neither peace nor stability in these lands.

The panel acknowledges the Security Council has been mandating new types of missions, such as helping combat Ebola in Liberia, but has made an argument that limits need to be set. Robust interventions such as those in Somalia in 1993 or the DRC in 2013 with the FIB should be exceptional. As peacekeepers become the targets of terrorists in Mali, the experts opined that UN operations are unsuited to counter-terrorism missions.

But the panel is not making a case for withdrawal from the world’s problems. The challenge is to match mandates with capabilities.

Protection mandates must be realistic, it says, and recommends that they be integrated as part of a wider political approach to resolve the underlying conflict.

In an echo of Brahimi, its makes the case for the Secretariat to be frank with the Security Council about what resources it needs to do these difficult jobs.

Member States like Indonesia should provide more resources, including peacekeepers, to carry out these complex mandates, including protecting civilians.

“When a protection crisis occurs, UN personnel cannot stand by as civilians are threatened or killed. They must use every tool available to them to protect civilians under imminent threat. Each and every peacekeeper — military, police and civilian — must pass this test when crisis presents itself,” the panel stated.

Indonesia by becoming a more prominent contributor to peace operations is exposing itself to greater burdens of responsibility and in the future graver moral dilemmas. UN peacekeeping is not all about getting a promotion, international experience, or coming home with some extra spending money from saving UN per diems. It can be about protecting civilians in ambiguous situations like civil wars where there may be not yet any peace to keep.

The UN may be trying to limit its exposure to war fighting scenarios, but it does not make peacekeeping an easy job. Whether as a civilian official, riot police, helicopter pilot, combat engineer, or rifle-bearing infantryman, the panel makes it clear that national caveats or other exceptions cannot release peacekeepers from a sacred duty when deployed to difficult peace operations. The ghosts of Rwanda and Srebrenica still haunt the international community. The protection of civilians, it says, is a core obligation of the UN.

Jim Della-Giacoma is the Deputy Director of the Center on International Cooperation. | Twitter: @jimdella