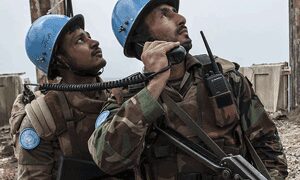 On December 21 last year, the United Nations Security Council extended the mandate of the peacekeeping operation in Liberia (UNMIL) until March 30, 2018. The Council hailed the mission’s overall progress toward restoring peace, security, and stability in the country. The drawdown, which UNMIL head Farid Zarif called “one of the most significant milestones for the country and the international community since the end of the civil war in 2003,” will have important repercussions for the future of Liberia and the UN’s broader efforts to sustain peace.

UNMIL is one of the first peace operations to draw down after the publication of the landmark 2015 Report of the Advisory Group of Experts (AGE) on the UN’s peacebuilding architecture. The report, unanimously endorsed by the General Assembly and Security Council, defined “sustaining peace” as a goal and process that encompasses activities across an entire cycle of conflict: outbreak, escalation, continuation, and recurrence.

In taking stock of the UN’s mixed track record at preventing relapse into conflict following withdrawals in theaters such as the Central African Republic (CAR) and Burundi, the AGE highlighted the importance of smooth transitions from peace operations to other types of engagement, often in the form of UN country teams. Assistant Secretary-General for Peacebuilding Support Oscar Fernandez-Taranco acknowledged the significant timing of the UNMIL drawdown in a recent Peacebuilding Commission meeting, arguing that the UN could take an important step toward better practices by effectively responding to the transition challenges in Liberia.

For decades prior to the signing of a Comprehensive Peace Agreement (CPA) in 2003, Liberia suffered through authoritarian rule and one of Africa’s most brutal civil wars, which killed more than 200,000 people and displaced over a million more. That year, the Security Council authorized UNMIL, which comprised 15,000 soldiers, police, and civilians. The dual impact of the peace agreement and UNMIL’s presence bolstered an era of relative peace and stability. Over the years, the country steadily developed its economy and institutions and enacted several security and justice reforms. It also managed to overcome a devastating Ebola outbreak in 2014, which claimed nearly 5,000 lives and caused economic stagnation but did not lead to major political instability. In January 2016, the World Health Organization declared Liberia Ebola-free.

Still, significant challenges remain. In October 2017, as UNMIL is preparing for its drawdown, Liberia will hold general elections for president and House of Representatives appointees. Political transitions are typically a period of heightened risk of instability at the best of times, and the current downsizing to around 1,000 personnel could make it harder to ensure safety during the polls. Elsewhere, the security and justice sectors are facing resource and capacity constraints, while weak institutions, governance challenges, and corruption persist. The reconciliation process is far from complete; power is highly centralized, risking future peace and stability; and economic revitalization is desperately needed. The inclusion of women, youth, and vulnerable groups in development processes remains a challenge.* How can the UN continue to support Liberia as it addresses these issues after the peacekeeping mission ends?

The Challenge of Smooth Transitions

The UN’s track record on mission transitions is mixed, with relapses into conflict not uncommon. In its report, the AGE compared mission transitions and drawdowns in places such as Burundi, CAR, Sierra Leone, and Timor-Leste, identifying three main challenges the UN faces in the transition out of peacekeeping operation mandates:

As Fernandez-Taranco noted, the Liberia transition provides a unique opportunity for the UN to test the potential of the Peacebuilding Commission in aiding mission transitions.

The AGE report understood that the Security Council’s ability to formulate context-appropriate and adequately resourced peacebuilding mandates depends on its access to comprehensive input and analysis from the field. Since collecting, analyzing, and processing such information would be taxing for the Council, the AGE recommends tapping the Peacebuilding Commission’s unique potential to convene global, regional, national, and local actors. With input from these sources, the Commission could provide the Council with concise and practical analysis and advice concerning peacebuilding needs, local and national capabilities and perspectives, relevant stakeholders, and critical resource gaps. This would in turn lead to better-informed peacebuilding mandates.

The Liberia configuration of the Peacebuilding Commission, which was chaired by Sweden, took up some of these challenges prior to the UNMIL drawdown deliberations. At a multi-stakeholder forum called “Sustaining Peace through Transition,” which was held in Monrovia in October 2016, more than 100 local, national, regional, and international stakeholders met to identify long-term peacebuilding priorities. The fruits of these discussions were subsequently taken up by the Peacebuilding Commission in New York, with the goal of generating recommendations for the Security Council to consider. This exercise helped bring to the Council’s attention a broad range of issues, such as youth unemployment, land rights, decentralization, reconciliation, and social cohesion, sending a strong message to member states on the importance of continued attention to peacebuilding priorities from international partners beyond the 2017 elections and the UNMIL transition.

With continued refinement, this new relationship between the Peacebuilding Commission and the Security Council might lead to mandates that better advance the goal of sustaining peace. But first, two shifts need to happen. The Council would have to make time, well ahead of deadlines for the creation of mission mandates, to listen to the Commission’s inputs on sustaining peace and use these in a meaningful way. And the Commission would have to ensure that the time of the Council is used efficiently, by having its insights prepared in a timely manner and delivered clearly and concisely.

The coming Liberia transition has also generated debate at the UN on other challenges and possible new ways forward. The first issue under discussion is how to put national actors at the forefront of peace efforts, by ensuring that national stakeholders are in the lead of transition efforts with the support of the UN. This framework increases the importance of the UN country teams and particularly the resident coordinator, given their ability to provide context-driven analysis, engage with local and national stakeholders, and implement programs on the ground.

In peace operations like UNMIL, local populations often perceive Security Council–mandated missions as “UN brand.” Once they shut down, local populations often find it difficult to understand the purpose, scope, and format of the UN’s continued presence on the ground. Better coordination between peace operations and country teams from the outset—complemented by coordination in New York between the Department of Peacekeeping Operations, the Peacebuilding Support Office, the Department for Political Affairs, and the UN Development Program—would allow all actors to better apply their comparative advantages to strategic goals, preventing duplication that costs the UN valuable resources.

The second issue generating debate in UN circles is the financing puzzle. Sudden drops in donor attention and funding trigger risks of relapse. Ensuring adequate, predictable resources for peacebuilding activities during and after transitions is key. But how to address this challenge? The first step is generating awareness: making clear to member states and other donors the risks of relapse caused by sudden funding cliffs. Studies estimating the expected peacebuilding costs in a particular context over fixed periods could provide answers, accompanied by discussions on how to enhance the capacities and resources of country teams as needed. Other solutions could include ensuring regular budget contributions for peacebuilding activities for a specific time following drawdowns, or looking into establishing special political missions after peacekeeping operations, to catalyze the needed attention and resources for a transitional period. Partnering with international financial institutions, particularly the World Bank, during transitions and exploring sources of innovative financing might also help.

With the advance notice given by the Security Council, and the thought that has gone into the AGE report, Liberia’s transition now offers the UN system a unique opportunity to show how it can sustain peace.

*A policy brief on “Addressing Liberia’s peacebuilding priorities through partnerships” by the Institute for Security Studies (ISS), to be released later this year, will focus more on the transition challenges of Liberia. It is part of the broader “Enhancing African responses to peacebuilding” project from ISS, the Center on International Cooperation, and the Peace Research Institute Oslo.

This article was originally published by the International Peace Institute (IPI) on January 30, 2017

Gizem Sucuoglu is a Senior Program Manager at the Center on International Cooperation, Twitter: @GizmouS

Lesley Connolly is a Policy Analyst in the Center for Peace Operations at the International Peace Institute., Twitter: @lesleyconnolly3