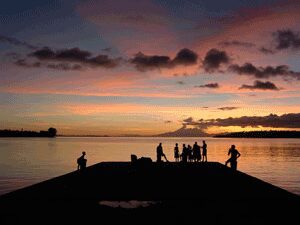 The Solomon Islands and the role of think tanks

To mark the 15th anniversary of the Australian Strategic Policy Institute (ASPI), CIC non-resident fellow Dr. Elsina Wainwright reflected on the role her policy advice played in the deployment of what became known as the Regional Assistance Mission to the Solomon Islands (RAMSI).

I vividly remember learning in mid-2003 that the Howard Government was going to intervene in Solomon Islands along the lines of ASPI’s Solomon Islands report. It was exciting that ASPI was contributing to government policy. But I was also apprehensive: while think tank analysts are used to putting forth ideas, they’re far less used to seeing their ideas implemented, particularly with such a policy shift.

I had worked with ASPI Director Hugh White to prepare the paper, along with contributors Quinton Clements, Mary-Louise O’Callaghan, and Greg Urwin, and with Solomon Islands’ perspectives from Sir Fr John Ini Lapli and Sir Peter Kenilorea. Hugh White and I believed Canberra’s longstanding Southwest Pacific policy of providing aid but expecting states to solve their own problems was not addressing Solomons Islands’ political and security crisis. Australia’s interests were engaged by this crisis, the Solomons government wanted Australia’s help, and we believed the policy should change.

ASPI was able to do three things with the Solomons report. First, it provided an input to the government’s decision to intervene. According to the recently-released official history of Australian peacekeeping, Prime Minister John Howard overruled his officials and decided to intervene in response to Solomons Prime Minister Sir Allan Kemakeza’s written request for assistance.

Second, once that decision was made, it needed implementation. The ASPI report provided a ready-made, high-level blueprint. We proposed the operation should be police, rather than military, led: the security challenges facing Solomon Islands were of a kind best tackled by police, and the optics of a police-led operation would be more benign.

Such an intervention would require Solomon Islands’ consent and should be multinational, with regional endorsement and participation. It should have two phases: the first would address the law and order crisis, and the second would be a comprehensive, long-term capacity building program to tackle governance and economic challenges which were fuelling the crisis.

While think tank analysts are used to putting forth ideas, they’re far less used to seeing their ideas implemented.

And third, ASPI contributed to public discussion on why Australia was embarking on such an operation and how Australia’s strategic interests were engaged. It helped explain how the crisis could destabilize the broader region, particularly PNG, and how Australia might not be able to insulate itself from any fallout. We also described how Australia, as the largest regional power, had a responsibility—and interest in being seen—to be a good neighbour and assist.

While the Regional Assistance Mission to Solomon Islands (RAMSI) broadly accorded with the ASPI report, it departed from our recommendations in a few key ways. In particular, we had recommended setting up an ad hoc agency, acting on behalf of Solomon Islanders, to temporarily control police and financing functions. RAMSI, however, left those functions under Solomon Islands government’s control. RAMSI’s minimal model was certainly easier to implement, but it left some of those implicated in the crisis in positions of power and RAMSI exposed to changing political alignments.

RAMSI quickly brought an end to the violence in Solomon Islands. The capacity building phase was always going to be imperfect, difficult and costly. Today Solomons Islands still has real challenges, not least the challenge of an island economy. But RAMSI could never have solved all Solomons’ challenges, as it couldn’t overcome Solomons’ geographical constraints. And nation building has proven enormously hard in every instance globally.

When I moved to a New York think tank in 2008, it became clear that the United Nations policy community and the US State Department stabilisation operations section regarded RAMSI and Australia’s deployable policing capability as real policy innovations, from which lessons could be learned.

Along with other early ASPI papers on East Timor, Papua New Guinea, and the merits of a deployable civilian policing capability, the Solomons report recommended an increased regional focus for Australia and an increased role for Australia’s police in protecting Australia’s interests abroad. It exemplifies how policy contributions can come from outside conventional bureaucratic channels.

An external contribution seemed to work especially well at a moment of policy inflection; perhaps it was easier for a significant change in policy direction to come from outside. ASPI could propose a policy alternative so far from the orthodoxy that it would have been hard to formulate within government. It also would have been easier for the government to disavow if it received strong criticism or didn’t work. With its perspectives from and communication with eminent Solomon Islanders, ASPI could also serve as an indirect intermediary between Australia and the Solomon Islands.

Such policy contributions should be one of the key roles of think tanks. There should be more interaction between government, think tanks and academia and the private sector, with more policy contestability and cross-fertilization of ideas, and less territoriality about their provenance. Canberra still trails Washington in this regard.

It was a privilege to be ‘present at the creation’ of ASPI and the expanding foreign and defence policy think tank space in Australia. Under the masterful guidance of Hugh White and ASPI Chair Robert O’Neill, and with tremendous colleagues in Mark Thomson, Peter Jennings and Aldo Borgu, ASPI was an intellectually stimulating and collaborative place to work. Hugh, Bob and the board encouraged policy entrepreneurship, and supported us when there was pushback. It was a pleasure to come to work each day.

I’m proud of what ASPI achieved in its early years and pleased it remains such an important voice on Australian strategic policy.

This piece was originally published on ASPI’s The Strategist on 29 August 2016.

Elsina Wainwright is a Visiting Senior Fellow at New York University’s Center on International Cooperation (CIC). She is also an Adjunct Associate Professor and Non-Resident Fellow at the United States Studies Centre at the University of Sydney. Twitter: @ElsinaWainwrigh