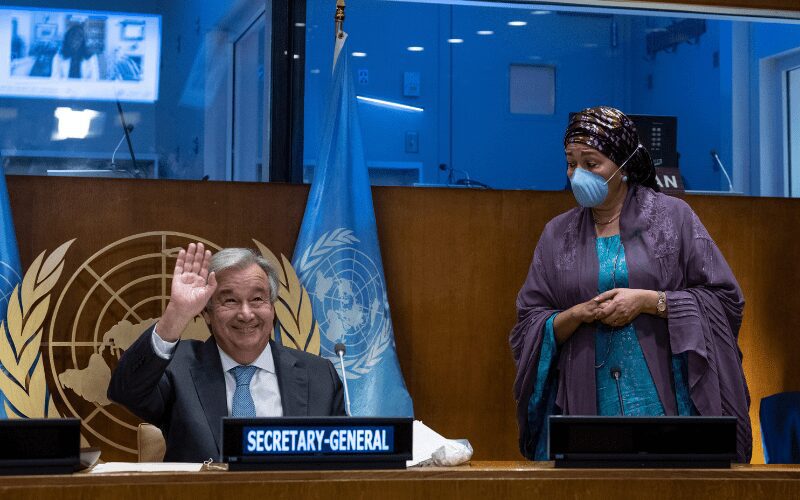 Last month’s United Nations General Assembly (UNGA) marked the 75th anniversary of the United Nations, and it could hardly have happened at a more important juncture in world affairs. The main themes and summits were highly relevant to the crises gripping the globe—from the future of multilateralism, to universal health access, to financing for development and economic recovery after COVID-19, to biodiversity and climate. And while this was the first virtual assembly, the sessions were many and varied, with high-level representation and a sense of urgency. Nonetheless, this year UNGA received only a third of the press coverage of prior sessions—a Lexis-Nexis search of major world publications returns just 558 results from September 1–October 1, 2020, compared with 1,766 for the same period in 2019.

The spotlight has undoubtedly been diverted by the various surprises that continue to erupt around the upcoming US elections. Yet the 2016 presidential election was also marked by intense and high-volume public and media attention—and UNGA still received roughly three times as much coverage (1,510 references) as it did this year. The stark fall in coverage is also likely to be the result of the COVID-19 pandemic itself, and the resulting virtual character of the meetings. In previous years, much of the analysis focused on the corridor meetings rather than the formal debates. While a virtual UNGA facilitated the participation of some heads of state who otherwise might not have been able to travel, it also destroyed the possibility of informal interactions in the corridors and coffee shops. Diplomacy is therefore suffering under the pandemic conditions, like so many other aspects of life.

The decline in coverage is especially unfortunate given the many high-stakes issues that were under discussion this year. One strategically significant process presented at this UNGA was that of the UN-convened working groups on financing for development, discussed in a summit on September 29th. These working groups showcased a new and modernized way of doing business at the UN—not only because they were virtual, but because they drew together a truly impressive number of representatives from governments, multilateral institutions, academia, civil society, and the private sector to develop recommendations in areas that are highly relevant to the COVID-19 era, ranging from liquidity, to debt, to trade and investment, to remittances, to overseas development assistance. The implementation of this process deserves a serious follow-up, and points ahead to the questions on debt and funding for COVID-19-affected economies that will be raised at this month’s annual meetings of the World Bank and the International Monetary Fund.

The Financing for Development summit devoted less attention to the issue of taxes—which may be because all attention is currently focused on demand-side measures, including tax relief, rather than the question of who will pay for the COVID-19 recovery. But this question will surely be back on the table before long, and it is likely to be a central topic of concern next year. The recent coverage of US President Trump’s tax returns echoes the publicity around the profits made by various multinational corporations during this difficult year, both of which have further raised popular grievances about tax avoidance. This level of inequality is not sustainable for our societies—and with the pandemic fueling demands for radical policies to redress it, we must recognize that it is time to either share the burden more justly, or face the reckoning that will come. The OECD’s new principles for corporate taxation of multinationals—published today but awaiting the results of the US election to move forward—should play a role in achieving this goal, but the debate will likely continue in 2021.

During UNGA, CIC and Pathfinders co-organized an event with Costa Rica, the World Health Organization, and UNAIDS on ensuring equal access to health technologies amid the pandemic—particularly a COVID-19 vaccine. The speakers provided a stark reality check to expectations for a global silver bullet. Despite excellent progress in the number of countries signing up to COVAX, the WHO-sponsored initiative to coordinate purchase of vaccines, the supply is still too constrained to ensure equitable access to all people within countries, and to poorer countries, when vaccines are ready for use. To expand supply on the scale we need, it is crucial to develop more partnerships with the private sector to share intellectual property and support coproduction in less-developed regions. A short video of key highlights from the event is available on the CIC website.

CIC and Pathfinders also co-sponsored and participated in a number of events focused on peacebuilding during UNGA—from the Peace One Day Live global digital experience, at which Pathfinders director Liv Torres announced plans to build a movement to halve global violence by 2030, to a high-level event on the importance of mental health and psychosocial support for conflict prevention amid the pandemic, organized together with the Netherlands and the g7+ group of conflict-affected countries. Our colleagues also spoke to a number of media outlets in the run up to and during UNGA, discussing issues ranging from US-China tensions to gender parity in senior appointments at the UN to the impact of COVID-19 for long term development—a full list of those appearances can be found here. Finally, we continue to publish research and analysis on the response to the pandemic.

Although the ongoing global upheavals of 2020 may have detracted from awareness of this year’s UNGA, they only underscore the importance of multilateralism in confronting the challenges we now face. The news that World Food Programme has been awarded the 2020 Nobel Peace Prize “for its efforts to combat hunger, for its contribution to bettering conditions for peace in conflict-affected areas and for acting as a driving force to prevent the use of hunger as a weapon of war and conflict” stands as a testament to the crucial role UN institutions can play in building peace, justice, and equality.