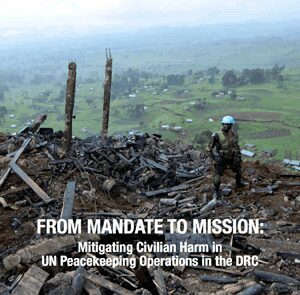 Peacekeeping operations deployed by the United Nations are often tasked with the protection of civilians as one of their primary duties.

But their positions of power and access to weapons mean that they sometimes harm civilians, both directly through their actions and indirectly through inaction in the face of armed groups inflicting damage on civilian men, women, and children.

As one of the largest and longest serving UN missions, the UN Organization Stabilization Mission in the Democratic Republic of Congo (MONUSCO) has been at the forefront of developing new protection tools such as Joint Protection Teams and Community Liaison Assistants. While MONUSCO has also put in place practices to monitor and respond to potential civilian harm its operations can cause, research completed by the Center for Civilians in Conflict (CIVIC) documented important areas where MONUSCO can improve its policies and practices to mitigate the harm caused by their operations.

First, there is a lack of clarity around how MONUSCO should differentiate between civilians and combatants in its operations. This confusion stems from the tactics of armed groups in the DRC who embed themselves within civilian populations, use civilians as human shields during fighting, and forcibly abduct civilians to serve in combat and support roles. Across the Mission, MONUSCO personnel are moving toward a more clear understanding that only individuals actively involved in hostilities should be viewed as targets for direct military action. But MONUSCO staff expressed various views on distinction to CIVIC researchers, not all in line with international humanitarian law.

MONUSCO tries to address the harm its operations cause to civilians. What is needed now is a formal policy on tracking and responding to civilian harm.

MONUSCO also relies heavily on the Congolese army (FARDC) to make targeting decisions and for information on the impact of operations. MONUSCO is mandated to collaborate with the FARDC to carry out many of its functions and, for practical purposes, needs to coordinate with the army to carry out operations effectively. Still, collaborating too closely or allowing FARDC priorities to shape MONUSCO military decision-making is problematic given accusations that the FARDC is complicit in violence perpetrated by some armed non-state actors. MONUSCO should build its capacity to operate more independently and to replace information from the FARDC with information collected by civilian components of the peacekeeping mission and directly from Congolese communities.

In practice, MONUSCO tries to address the harm its operations cause to civilians. What is needed now is a formal policy on tracking and responding to civilian harm so the Mission can better understand patterns of harm, adjust operations to reduce harm, communicate more effectively with civilians around its policy to address harm, and respond to each case of reported harm systematically and consistently.

UN officials in New York and MONUSCO staff on the ground need to ensure that rather than being dictated by more narrow military objectives against armed groups, military operations and engagement decisions are instead driven by civilian protection priorities and analysis of civilian harm.

These points are explored in more detail in CIVIC’s report, From Mandate to Mission: Mitigating Civilian Harm in UN Peacekeeping Operations in the DRC. Many of the observations included in the report are ideas proposed by MONUSCO personnel themselves. They reflect ideas for best practices proposed by dedicated officials within the Mission, but which require adoption and support implementation and further capability development.

Lauren Spink is a Peacekeeping Advisor at Center for Civilians in Conflict (CIVIC). She is also the co-author of a recent CIVIC report Under Fire: The July 2016 Violence in Juba and UN Response. | Twitter: @lspink01