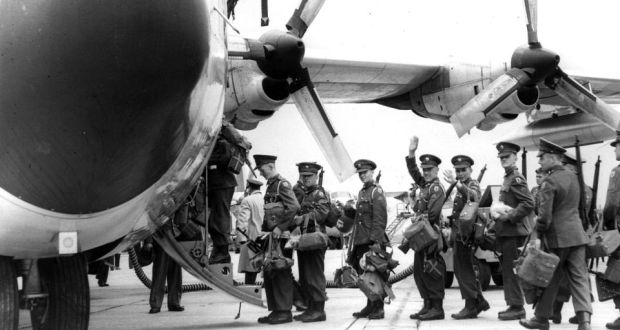 In an organisation as durable and complex as the United Nations, opportunities for reform do not come along very often. It is also singularly rare for Ireland to have a debate about its defence commitments. So 2015, the year when the UN conducts a review of peacekeeping operations and the Government prepares a White Paper on defence, must not go to waste.

And there is much work to do. Beneath the rituals of mutual congratulation seen during secretary-general Ban Ki-moon’s recent visit to Dublin, questions are being asked about the health and future of the Irish-UN peacekeeping relationship. Long gone are the days when Irish soldiers would deploy to countries badly equipped and poorly briefed. Experiences of Nato and/or EU operations have raised expectations. Concepts of force protection – the ability to respond to attack and to retrieve casualties – have changed forever. In 2013, Ireland was the only European country willing to contribute to the UN disengagement observer force (UNDOF) on the Golan Heights between Syria and Israel.

Command and control of the mission broke down in August 2014 when lightly armed Filipino soldiers were attacked by Jabhat al-Nusra, a jihadi group operating in the area. The Filipinos alleged the UNDOF force commander ordered them to surrender, which they refused to do. Eventually the Filipinos soldiers, with Irish help, succeeded in escaping to safety.

Ill-equipped, poorly led peacekeepers implementing an outdated mandate – the story seemed a familiar one. But if the episode seemed a throwback to the darker days of UN peacekeeping in the last century, the response of the Defence Forces personnel on the ground and the Government in Dublin was markedly different to the resigned acceptance of previous Irish governments to bad news from the Congo or Lebanon.

The UN’s performance was simply not good enough; Minister for Defence Simon Coveney argued for such a strict, conditions-based approach for future Irish contingents.

Over the past two years, I have consulted a number of officers of the Defence Forces for a report on the state of UN peacekeeping published by the Centre on International Co-operation at New York University.

They are all committed and experienced peacekeepers that have served all over the world, from Liberia to Lebanon to Timor Leste. They have been quick to praise the UN for its reforms. The organisation has come a long way since the peacekeeping disasters of the mid-1990s when poorly led, ill-equipped and uninformed peacekeepers were humiliated on operations in civil wars in Bosnia, Somalia and Rwanda: UN logistical support has improved, relations between peacekeepers and civilian agencies are better and the UN has tentatively begun to collect and analyse intelligence. But the same military officers are also deeply concerned that the UN is not keeping pace with Irish expectations for reform. They have highlighted three areas of particular importance.

First, there is an almost complete absence of UN peacekeeping doctrine when it comes to the training of UN contingents. What limited guidance exists is inadequate and unread. Ireland prepares for UN missions using Nato and EU training doctrine and standards. “Time lost” in mission learning UN concepts and operational structures remains a widespread problem for troop-contributing countries. Meanwhile, senior UN officers frequently redesign (or ignore) UN structures such as joint operations centres or joint mission analysis cells according to their preferences and previous experiences.

Second, UN contingents are often not tailored according to the mission environment and operational threats. According to one senior Irish officer, “The UN goes looking for the same battalion no matter what the mission.”

And UN contingent standby arrangements remain “a lowest common denominator” – without any requirement for the diverse range of resources such as firepower or mobility – that may be required. “Mandate creep” is re-emerging as a significant problem. Poorly resourced peacekeeping missions struggle to fulfil the myriad duties expected of them.

Third, UN command and control arrangements are hampered by a lack of understanding of military requirements by UN civilian officials. Military officers often have no control over critical assets such as air-lift capabilities; they struggle to respond to quick-moving events. Meanwhile, the increasing use of civilian contracted air crew for peacekeeping missions places a very high “duty of care” barrier to using these assets for military operations – civilian contractors often do not allow their personnel to deploy to hostile areas. The lack of an operational headquarters or regional headquarters combined with the scarcity of military personnel in New York means that peacekeeping commanders spend much of their time talking to civilian officials in New York, trying to unblock political and logistical problems, instead of focusing on day-to-day military operations.

Operational and logistical concerns about UN peacekeeping are not insurmountable if large, capable European countries work together and deploy together, including by unlocking inter-organisational funding constraints that prevent EU battlegroups from deploying on UN missions. Post-Afghanistan, senior military leaders such as the UK’s chief of the defence staff, Gen Sir Nick Houghton, have called for a much greater European commitment to UN operations. Irish soldiers – with their recent experiences of UN, EU and Nato-led operations – are well-placed to advise on reforms that will address European concerns over UN operational deficiencies.

The year of 2015 and the UN review of peacekeeping chaired by Ramos Horta should mark a new era of European peacekeeping. Ireland can play an integral role.

Edward Burke is an associate fellow at the Foundation for International Relations and Foreign Dialogue. The report Walking Point for Peace: An Irish View on the State of UN Peacekeeping, co-authored with Jonathan Marley of the London School of Economics, is published by the Centre for International Co-operation at New York University