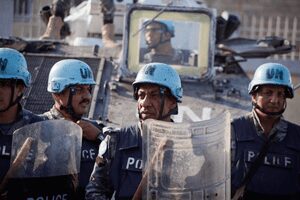 Putting Prevention Back in the U.N.’s Vocabulary

Prevention has long been a dirty word at the United Nations: Some member states equate it with interference, and the need for early warning that accompanies it with spying. But in a time of crisis, some think the time has come to reconsider what role the world body should play in stopping conflict before it happens.

It is hard to argue against the idea that preventing conflicts from breaking out is better than dealing with their tragic consequences. Take those currently enveloping the Middle East in Libya, Syria and Yemen, where the counterfactual is strong, if hard to prove. If they had been prevented, hundreds of thousands of deaths could have been avoided. And the international system would not now be paying such a high and unsustainable price to address the plight of the millions that have been displaced.

Prevention would require more interference, as some member states fear. It would force states to trespass on each other’s sovereignty, often held as sacred, or have the U.N. to do it on their behalf. But being more intrusive should not be equated with the increased use of internationally sanctioned violence. Prevention does not necessarily mean bombing more often, just paying attention sooner. As former U.N. Secretary-General Boutros Boutros Ghali put it almost 25 years ago, in his landmark 1992 document “Agenda for Peace,” the U.N. must aim “to identify at the earliest possible stage situations that could produce conflict, and to try through diplomacy to remove the sources of danger before violence results.”

Prevention has now come back onto the agenda thanks to three big reports that U.N. expert panels prepared in 2015 on U.N. peace operations and peacebuilding, as well as on women, peace and security. Published between June and October last year, the reports are now coming up for sustained debate in various U.N. fora, including resolutions before the U.N. Security Council and General Assembly, and a High-Level Thematic Debate on Peace and Security in the General Assembly on May 10-11. The way they are discussed will tell us if the big shifts the expert panels argued for are finding constituents among the U.N.’s membership.

Few busy diplomats have thoroughly read all three reports, but there is help in understanding them. A global process of civil society groups is digesting them ahead of the upcoming high-level debate. Eli Stamnes and Kari Osland from the Norwegian Institute for International Affairs (NUPI) have also provided a great service with their very readable synthesis. All three reports make the same point: We cannot have peace without prevention.

There is some hope that a new agenda for prevention might be emerging. The world of high policy is not as static as a cynic might suggest, and one hopeful development is the Sustainable Development Goals (SDGs), which were adopted last year after a lengthy negotiation process in New York. Though more generally focused on development, the SDGs are an important fulcrum for change on conflict prevention, as well. Their universal commitments include, as part of SDG 16, the goal to achieve peaceful societies. Prevention is not a new idea. The first lines of the U.N. Charter invoke it. The body was founded to save succeeding generations from the scourge of war. But the SDGs now make prevention everyone’s responsibility. It is a small, but important step in the right direction.

But what exactly might prevention look like? What might the U.N. do differently to pursue it? There are some old elements, as well as some new ones still emerging, that are worth noting.

First, Boutros Boutros Ghali’s “Agenda for Peace” would be a good place to start. It recognized the primacy of peacemaking, and underlined the importance of understanding conflict, or fact-finding; getting into the habit of looking ahead, or early warning; acting sooner, or preventative deployment; using existing tribunals, such as the World Court; and using development assistance to avoid fragility, or amelioration through assistance, before resorting to sanctions or the use of military force.

Second, the U.N. General Assembly high-level debate on peace and security should include frank discussions of why we have failed to prevent today’s headline-grabbing conflicts. That will require member states to reflect on their own failings. Last year’s three reports, for instance, noted the changing nature of conflict. While interstate conflict is still with us, the reports highlight how in this century international bodies are increasingly grappling with conflict between different groups within a society or between the society and the state itself.

It is no mystery why some groups are often going to war against their own states: The dirty secret is that those states’ governments—that is, U.N. member states—are often the problem, through their abusive practices. Open conflict is often the visible proof that they have failed at prevention. But rather than write the U.N. off as rotten from the inside, because it is composed of imperfect states, this is a moment to acknowledge its strengths. While far from perfect, the Security Council and General Assembly are still good places to put pressure on underperforming governments.

Third, member states need to see the component parts of the U.N., with its many different departments, agencies and funds, as primary tools of prevention. In the forthcoming debates, they should tone down their opposition to using the good offices of the secretary-general to head off conflict, and instead task and resource the Secretariat to do a better job of it. They should support the principle that the U.N.’s peacemakers should be allowed to speak to all sides. This is what political solutions require.

Fourth, member states need to recommit to multilateral and regional diplomacy. Conflicts are spilling across borders and bedeviling whole regions. As the displaced people from these conflicts travel the globe, the stakeholders in any one conflict are increasingly numerous and dispersed. U.N. diplomacy is better able to intervene in such settings due to its reach across borders, and it should be encouraged and better-resourced.

Finally, drawing on the universality of the SDGs, member states should recognize the global challenge that prevention presents. Working with regional organizations is not the solution to every problem, but having a presence in each region is a start. In the field of peace and security, the U.N. has struggled to see all regions as needing attention. Its peace operations are overwhelmingly focused on Africa, and it only has regional centers from which to conduct preventative diplomacy in Central Asia, Central Africa and West Africa. The pushback from stronger sovereign states maintains the fiction that there is no need for these tools in Asia or Latin America. This blinkered vision on prevention needs to be lifted.

In an era when war has proved to be a poor option for achieving end goals and coercive tools have been shown not to be working, the time may have come to more firmly embrace prevention. Listen closely to the coming debates. If member states reflect thoughtfully more than they rant reflexively, it may be a subtle sign that last year’s reports are shifting the debate. A change of tone may be the first indication that prevention is back in the everyday vocabulary of international diplomacy.

This article was originally published by World Politics Review on March 14, 2016.

Jim Della-Giacoma is the deputy director at the Center on International Cooperation at New York University, the editor-in-chief of the Global Peace Operations Review, and a visiting fellow in the department of social and political change at the Australian National University’s College of Asia and the Pacific. | Twitter: @jimdella