Owning God: An Identity Based View of Violent Extremism

The Protestant Movement in 16th century Europe was one of the most successful counter-religious movements in modern history. It created not just a new belief system but also a new coherent self-concept for believers. From being mere impassive laymen without access to the scripture, they became super-empowered, having the same access to God as the priests. Essentially, they were no longer mere believers, but now extensions and signifiers of their beliefs – agents of God on the earth, just as the Kings and Priests. This had incredible impacts on the laymen who had previously felt marginalized by the clergy class.

The Catholic Church’s desperate efforts to discredit Martin Luther and other leaders of the Protestant movement; destroy protestant leaflets or disrupt the use of the new printing press technology at the time was less than successful. The Protestant movement had gotten a life of its own. Aside from having access to the Holy Bible, laymen for the first time were able to draw their identities and sense of who they were from their beliefs. Religion had become an ideological system through which the masses could enhance and assert their sense of ‘I am’. To strengthen their newfound identities as well as their new group identity, the Protestants had to believe not just in the canonicity of their beliefs but also in the superiority of their beliefs over the dominant Catholic beliefs.

They knew that for as long as they were part of the Catholic laity, they would remain not only faceless but also socially, economically and politically inferior to the superior clergy class. But a new religious identity, strengthened by a newly obtained in-group membership would give them a sense of superiority over their Catholic neighbors and an unprecedented equality with the clergy class that had lorded over them for so long. A new identity was manufactured. Though unseen, God became appropriated, owned and personified, to the extent of dying or killing for.

Religion has obviously evolved over the years. Religious identities have evolved along with it. Systems of control have been created throughout history to enforce loyalty to imagined realities, as Yuval Harari, the author of Sapiens: A Brief History of Humankind, put it. When well articulated and repeated, they become compelling, beyond the appeal of superior reason.

Over the centuries, religious groups and sects have emerged and armed with nothing other than doctrines and practices that enhance members’ self-identity. The esoteric spaces they created became a rallying point for the lost, the marginalized and the dispossessed. Those that had no strongly rooted sense of identity or whose dominant identities – religious, ethno-national, gender or socio-economic – had been captured either by states, class struggles or other systems of suppression, found a safe haven in new forms of super-enforced transcendental identities. It never really mattered that spirituality got relegated to the background and replaced with a long list of dos and don’ts.

Also, codes of conduct were created to guide members’ relationships with each other and with non-members, thus strengthening in-group identities. Group identity became enhanced through the uniqueness, sanctity and feeling of superiority of in-group beliefs over other beliefs.

The self-appropriated or “my” God became the only true God and every ‘other’ God irrespective of name or semblance with own religious beliefs became fake, with their adherents wrong enough to be punished by death. Gradually, the space to argue or challenge religious beliefs shrunk, for in challenging beliefs, you are challenging the believer, who is now one and the same with his/her beliefs. Reason got overtaken by ideology; spirituality by identity. The natural human survival instinct started driving religious beliefs. The beliefs must survive so that the believer can also survive.

Believers were ready to die for their beliefs, for to rob them of their beliefs was to rob them of their sense of self – of life itself. This was the case with the early Christians in the first century. They were a small band of unarmed zealots that posed no threat to the state or political structures of the time. Their teachings however had created new forms of identities to the extent that ethno-nationalist identities were abandoned for the new super-enforced religious and group identities. Writing to believers in Galatia, Saint Paul wrote “There is neither Jew nor Greek, there is neither bond nor free, there is neither male nor female: for ye are all one in Christ Jesus”. In another letter to believers in Colossae he went even further: “There is neither Greek nor Jew, circumcision nor uncircumcision, Barbarian, Scythian, bond nor free: but Christ is all, and in all”.

It was not much different with Islam. One of the most important messages of the Sūrat al-Ḥujurāt in the Qur’an is the unity and brotherhood of the Muslim Ummah, irrespective of nationality, race or socio-economic status. It upholds that “the believers are but brothers” (Q49:10).

Violent extremism is caused by an avowed identity derived from strong religious beliefs and a strong in-group membership that stigmatizes and dehumanizes other groups and beliefs.

The major religions successfully manufactured strong religious identities by creating a strong in-group identity in addition to a strong set of religious beliefs where members could derive their sense of self. For the early Christians, the new religious identity was so strong that they felt they were no longer part of the world. When chased out of Jerusalem, persecuted and killed, they held on to an identity that transcended space and time.

It is a comparable self-identification with religious beliefs that impels ISIS fighters. As pessimistic as it sounds, ISIS may be thrown out of Mosul, Raqqa and other territories that they have held, but their ideology will abide, so long as members continue to derive their identity from the group’s ideology. Like Nazism, ISIS has evolved into a form of messianic movement that offers the promise of a new life for those that are in need of an identity re-boot among a group of similar others.

An interesting aspect of groups like ISIS, Boko Haram, and Al Qaeda is that unlike leaders of the early religious traditions such as Jesus Christ, Prophet Mohammed, the Buddha, etc, they do not have any special spiritual powers. They do not heal the sick, split the moon, supernaturally assuage the thirst or hunger of fighters and followers, see past lives, raise the dead, walk on water let alone turn water into wine! They do not have any spectacular, special powers, yet they do have followers that are not only ready to lay down their lives for them but are also ready to kill and maim religious Others for their beliefs. Essentially therefore, it is not about the leader. Abu Bakr Al-Bagdadi or Abubakar Shekau can be taken out but it certainly will not bring an end to ISIS or Boko Haram, for it is not about them, but about a living belief system that has gotten so much life that believers see a separate belief and separate believing Others, as deserving of extinction.

In dealing with this menace, governments and the international community are unfortunately making the very same mistakes that the Roman colonialists made in the first century. Frameworks of counter-narratives developed today sound as if they are derived from counter-reformation propaganda in 16th century Europe. UN Security Council Resolution 2129 (2013) for example talks of a nexus between terrorism and ICT, particularly the Internet. The problem is no more with the Internet than the problem with the protestant reformation was with Johann Guttenberg’s new printing press technology.

The new comprehensive framework to counter terror narratives developed by the Counter-Terrorism Executive Directorate in the UN Security Council, among various appeals, calls for counter-narratives to emphasize terrorists’ inhumanity, reveal the flaw in their arguments and provide alternative points of view. While these are all useful, a more nuanced understanding of the identity-based drivers of extremism is needed. At the core of radicalization is a crisis of identity that pushes adherents to identify with religious beliefs that justify violence against out-group members – irrespective of their faiths. Their action does not have much to do with the religion they profess, but all to do with a super-enforced religious identity. They kill and maim, not because their religions tell them to, but because their identity (derived from their religious beliefs and a group to which they feel a sense of belonging) is at war with a collective identity that they imagine is opposed to their own religious identities.

Amin Maalouf, in his seminal work In the Name of Identity: Violence and the Need to Belong draws on his personal experience to argue that our dominant identity is formed in most cases in relation to allegiances that we perceive are under attack, or more specifically in relation to the enemy group that we fear, hate or resent most. Once a group feels humiliated by another group, Maalouf argues, it is easy for them to define their identity and agitation around that humiliation. This is corroborated to an extent in Dominique Moisi’s Geopolitics of Emotion: How cultures of fear, humiliation and hope are reshaping the world. He writes that the Arab-Islamic world is dominated by a feeling of humiliation, which he notes, is rapidly turning into hatred. Within Moisi’s thesis, the humiliation of the Muslim youth in Palestine is a source of grievance to the Muslim youth in Paris, although their living conditions, national and racial identities are very dissimilar. A sense of collective humiliation, derived from a common religious identity, becomes a rallying point for violence.

Essentially, violent extremism is caused by an avowed identity derived from strong religious beliefs and a strong in-group membership that stigmatizes and dehumanizes other groups and beliefs. In figure 1, Religious Beliefs and Group Membership Grid, I have shown the various forms of identity linked to religious beliefs and group membership, its implications and risks and possible windows to their transformation and negotiation. 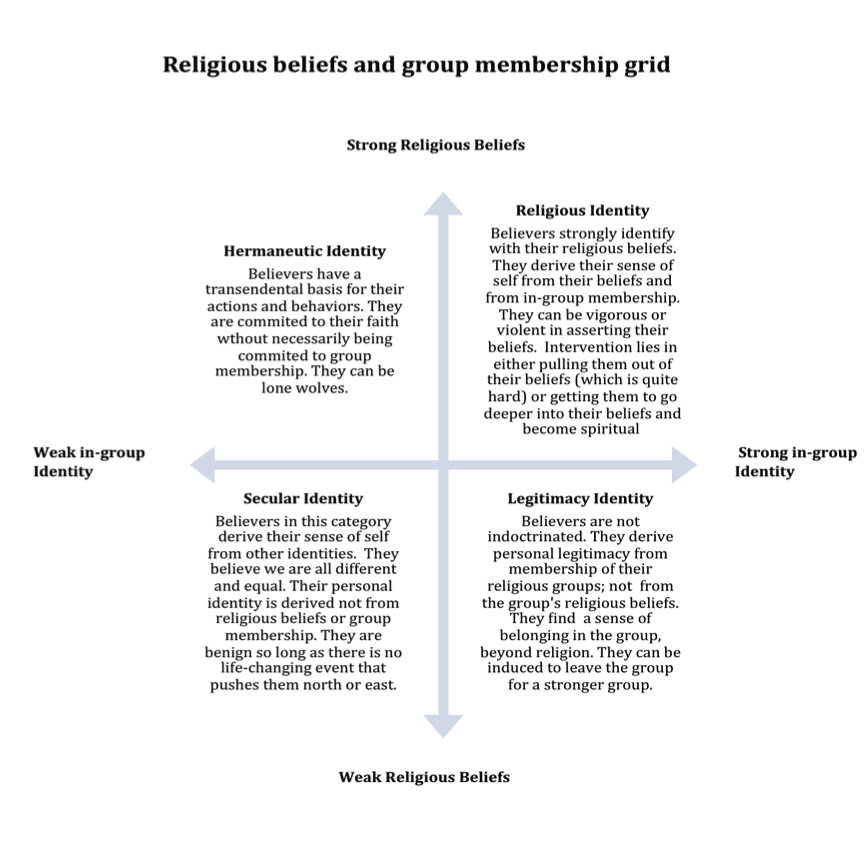 Countering terrorist narratives can even be counter-productive if not carefully planned and executed. Texts from counter-narrative campaigns from moderate religious leaders, governments and organizations can provide the script for separation and Othering, which can potentially force strong in-group identity.

What we are facing is not a new religion or a new belief system. It is a new form of super-enforced identity. Call it a counter-culture and you will not be too far from the truth. There have been various non-state counter-culture movements throughout history – from the Protestant movement to the hippie counter-culture of the 1960s. But there never has been any, with such virulent and insidious character in modern history.

The counter-reformation narratives created by the Catholic Church’s propaganda machine, housed within the Sacra Congregatio de Propaganda Fide (Sacred Congregation for the Propagation of the Faith), sought to discredit Protestant leaders. When this failed, it sought through inquisitions to punish the printing of heresies. The printing press was mistaken for the problem. The same mistakes are being made today unfortunately, but this time with far graver consequences.

The Internet giants can certainly do more to help prevent violent extremism and of course there is need to explore all intervention options. However resorting to the easy option of controlling or regulating the internet as suggested by British Prime Minister Theresa May is likely to do more harm than good. Regulating cyberspace places the ladder on the wrong wall. It was Stephen R. Covey who famously said that if the ladder is not leaning against the right wall, every step we take just gets us to the wrong place faster.

Dr. Jacob Udo-Udo Jacob, author of Convincing Rebel Fighters to Disarm: UN Information Operations in the Democratic Republic of Congo (De Gruyter, 2017) is a Visiting Scholar at the Center on International Cooperation at New York University.