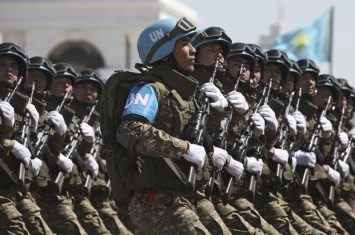 The word peacekeeping does not appear anywhere in the Charter of the UN. Yet, ever since the first peacekeeping operation was launched in May 1948 in the Middle East, that one word evokes the very raison d’etre of the world body. Since then the UN has deployed 70 peacekeeping operations with some significant triumphs (East Timor) and spectacular tragedies (Srebrenica and Rwanda).

Despite 67 years of experience UN peacekeeping has been in distress for the past few years.

One reason for this is the serious disconnect between the changing nature of conflict and the ability of UN to respond to them. In earlier missions UN peacekeepers merely had to observe or monitor peace agreements or ceasefires that had been accepted by belligerent states. Today, they are increasingly deployed in areas where there is little or no peace among warring parties.

Another reason is the deep divide between countries that mandate and fund peacekeeping operations (the five permanent UN Security Council members (P-5) and large donors, such as Japan and Germany) and the biggest troop contributing countries (TCCs, such as India, Pakistan and Bangladesh) whose personnel actually carry out the operations in the field. As the mandates have got tougher without a commensurate increase in funding or equipment TCCs are demanding a greater say in making the mandates and more funding. This so-called gold versus blood contest further stymied UN peacekeeping.

A third factor is the institutional divide within the UN between the department of peacekeeping operations—who lead the military operations—and the department of political affairs—who seek political solutions to the conflict. Additional factors, such as sexual abuse by peacekeepers and the inability to deal with violent extremism and terrorist groups, highlighted the deep crises in UN peacekeeping.

Against this backdrop the much anticipated UN report Uniting Our Strengths for Peace—Politics, Partnership and People released last week is significant. Prepared by a 16 member high-level panel led by former Timor-Leste president Jose Ramos-Horta the report is both candid in its critique and bold in some of its recommendations.

The report calls for “four essential shifts” in UN peace operations: first, peace operations should be designed with politics and political solutions in mind rather than the other way around; second, instead of a one-size fits all, peace operations should be tailor-made for each specific situation; third, there needs to be greater collaboration, consultation and integration within the UN system to prevent conflict and ensure peace; fourth, the focus of the UN secretariat should shift from the headquarters to the field so as to carry out the mandates.

The report also puts protection of civilians front and centre but also calls for greater convergence between “expectation and capabilities”. It categorically calls for UN troops not to undertake counter terrorism operations and also separate themselves from other non-UN military operations in the area. Additionally, the report stresses the need to hold peacekeepers more accountable for sexual abuse. In recognition of intra-secretariat tussles, the report proposes the creation of additional positions and offices, notably that of an additional deputy secretary-general for peace and security and a single “peace operations account” to finance all peace operations and related activities in the future.

While it is unlikely that all the recommendations will be accepted in the politically charged UN, many of them are likely to find wide support among UN members.

For India, the report offers a unique opportunity to leverage its peacekeeping credentials (which are strongest in the field) to play a leading role in determining the nature and scope of future peace operations.

However, India should not use the report only to confine itself to peace operations. If India plays its cards well the report would also be very useful to strengthen its case for reform of the Security Council and permanent membership. The new Indian leadership is certainly up to the task.

This article was originally published in LiveMint on June 21.