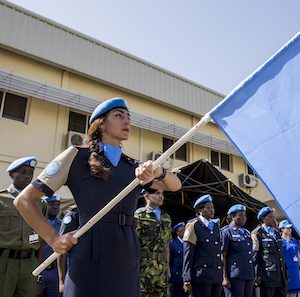 Getting clear about conflict prevention at the UN

The 70th anniversary of the founding of the United Nations (UN) last year has prompted new questions about the organisation’s ability to effectively address peace and security problems around the globe.

The UN peace and security architecture has expanded dramatically since the Cold War. This has partly been in response to the changing nature of conflict, but it is also a reflection of the organisation’s own ability to provide effective responses.

After an increased number of complex intra-state conflicts in the 1990s, the world saw a sharp decrease in numbers in the early 2000s. However, in the past five years, these numbers have again been on the rise.

This is particularly important for peace operations; perhaps the most visible of international responses to conflicts. Peace operations have, at best, delivered mixed results. This is particularly true for robust missions, which are drawn out over prolonged periods, and face increased challenges in their ability to deal with transnational threats such as terrorism and the protection of civilians.

Attempts to reform the UN’s peace and security mechanisms have been undertaken since the 1990s.

The so-called Brahimi Report of 1999 was a response to the challenges faced by UN peacekeeping in the ’90s, especially the failure to protect civilians in Bosnia and prevent the genocide in Rwanda. The report led to positive changes – including the creation of the UN Peacebuilding Architecture in 2005.

Problems of effectiveness, funding, coordination and coherence remain, however. Peace operations have not, for example, been able to fulfil the goals of protecting civilians; nor has the UN been effective in preventing conflicts and sustaining peace.

It is not surprising that a new series of reviews of the UN’s peace and security architecture were conducted in 2015, namely on peace operations; the Peacebuilding Architecture; and women, peace and security. These reviews focused on bettering the role played by the UN and recommended that conflict prevention be placed at the core of responses.

The 2015 reviews argue that the fragmentation and ‘silos’ that typify UN responses to conflict are not just costly, but also reduce the overall impact of UN efforts. Many – both within the UN and outside of it – believe that an increased focus on conflict prevention would be far cheaper than a continued narrow focus on ongoing or recurring conflicts.

But if the idea of turning conflict prevention into a core UN responsibility is broadly accepted among stakeholders, why has the UN been so slow to implement it?

One challenge is the difficulty that any organisation faces in shifting to behave in a precautionary manner; even when such a stance is considered to be more cost-effective than remedial measures.

Likewise, it is hard to get stakeholders to think about the root causes and to adopt a long-term view of conflict, precisely given difficulty in assessing the overall impact of preventive measures.

How do we know when conflict prevention works? Without better mechanisms to plan and evaluate conflict prevention, it will be difficult to alter the structure of incentives, and this principle will remain a secondary function of the UN.

In general, the UN has ­– even if implicitly – adopted short-term and insular views on the causes of conflicts, which consequently shape its responses to instability. Existing conflict-prevention mechanisms, such as early-warning systems, are mostly designed to detect only imminent or recurring conflicts.

Outbreaks of conflict are typically the manifestations of much longer trends and underlying factors, which means this short-sighted approach is suited only to a small number of instances.

The emphasis on imminent conflicts, rather than long-term trends, has also made conflict prevention a politically sensitive topic. Member states fear that being included on such lists may lead to stigma and even undesired intervention.

In addition, early-warning mechanisms at the UN have widely been designed and implemented in an ad hoc and piecemeal manner; involving different components within the mission structure and UN agencies – from the UN Security Council to the Joint Mission Analysis Cell (JMAC).

The JMAC, in particular, illustrates some of the limitations of the current UN approach. Although it aims to coordinate analysis and provide early warning, in reality, it often does not optimally utilise the information and capabilities of all mission components, such as police and the UN Department of Safety and Security.

This results in skewed and incomplete analysis, which is insufficient for effective early warning and operational planning. An effective early-warning system should provide integrated analytical tools, which would allow decision-makers to take quick and calculated operational decisions, but also long-term assessments. This should become an intrinsic part of sustainable peace-planning processes.

There are still critical questions on what it really means for specific roles and responsibilities, especially within the UN General Assembly, the Security Council, and the Peacebuilding Architecture.

In order to translate the concept into policies and mechanisms within the UN and partner organisations, such as the African Union, there must be more to conflict prevention than just principled acceptance from stakeholders. Specifics are needed, along with practical elements that would allow for concrete strategies and plans to be formulated.

For conflict prevention to become a central element in the UN’s approach to peace and security, there is essential groundwork to be done. This includes an improved understanding of what makes conflict prevention effective; to better identify the types of mechanisms that should be put in place.

This is particularly important in reducing the fragmentation between different components – such as peace operations, peacebuilding efforts and conflict prevention.

In the end, strategic choices will have to be made. If everything counts as conflict prevention, then conflict prevention means very little indeed. The UN needs to focus on understanding not only the key drivers of conflicts, but also the conditions needed for durable peace. Only then will it be able to anticipate and address the root causes of conflict; and design and implement innovations for effectively preventing it.

This article was originally posted by ISS | Africa on July 7, 2016