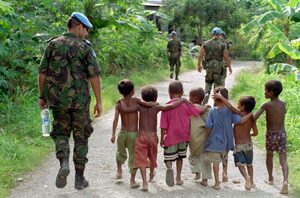 Peacebuilding has evolved significantly in the last 20 years. Now that we know what it is meant to achieve, the time has come to do it well.

However, Boutros-Ghali is also remembered for his seminal 1992 policy document, the Agenda for Peace. This document shaped the way in which conflict-resolution responses are defined, underscoring the importance of peacebuilding not only at the UN, but also globally. His passing is therefore an opportunity to reflect on what has been learnt in terms of peacebuilding responses, and how these could be improved.

The Agenda for Peace guided the UN and the broader field of conflict resolution on the types of activities that could be conducted before, during and after conflict. Although many of the ideas on preventive diplomacy, peacekeeping and peacebuilding weren’t new, it assembled these in a policy-friendly framework and offered a coherent understanding of the tools available for resolving conflict.

Boutros-Ghali showed that peacebuilding could be an important tool to help countries in their processes of sustaining peace. He defined peacebuilding as the ‘action to identify and support structures, which will tend to strengthen and solidify peace in order to avoid a relapse into conflict.’

He also noted that peacebuilding responses should form a crucial part of a well-considered and integrated process within a wider and clear political strategy that aims at responding to conflicts. As he said, ‘Peacebuilding is not a therapy that the UN can attempt to impose to an unwilling patient.’

At the time, the definition and scope of peacebuilding was often limited to the range of tasks that would be conducted after conflict had ended, and following a peacekeeping operation. Today, all of these concepts and responses seem far less linear and the idea of post-conflict peacebuilding is becoming outdated. Peacebuilding is increasingly seen to be part of an overarching approach to sustain peace, which means it becomes embedded in other types of responses, including preventive actions and peacekeeping.

Today, 20 years later, Boutros-Ghali’s ideas continue to influence responses and structures at the UN, the African Union (AU) and elsewhere. Ten years ago, the UN created an entire peacebuilding architecture after the release of the Agenda for Peace. The AU, since its establishment in 2002, has increasingly evolved in creating its own frameworks for peace operations and has a promising – albeit underused – post-conflict reconstruction and development framework.

Although the concept of peacebuilding has evolved, the international community has not yet identified how to do it well; nor does it yet seem able to pinpoint what exactly constitutes successful peacebuilding. The field still seems hamstrung by its inability to effectively plan and execute, measure and use results, generate institutional learning, and identify better ways of engaging in highly complex environments.

Peacebuilding is a long-term process, constrained by short-term realities

Peacebuilding is a long-term process, constrained by short-term realities. Progress in peacebuilding processes has to be sustained, even when particular gains are seen. Mozambique and Burundi, for instance, are good examples of how plans have to be supported in the longer term to avoid relapsing into conflict. More fractured peacebuilding processes in countries like the Central African Republic and the Democratic Republic of the Congo show that there is still a lot to learn about engaging in effective peacebuilding.

Peacebuilding practitioners are under considerable pressure to show positive results, both for accountability and to demonstrate contributions made. This means that peacebuilding implementation often focuses on immediate and short-term responses, emphasising outputs rather than longer-term outcomes, which are more difficult to achieve.

This, in turn, leads to a messy, or retrospective, monitoring and evaluation approach, beset with insufficient allocation of resources and capacity, and made even more complicated by a lack of clarity on what success or impact is; and what the outcomes are and should be. In this way, many opportunities for learning are lost. It also compromises the ability to gather satisfying evidence of success; both for practitioners and their stakeholders.

How can these shortcomings be reduced? Timely and thorough planning is crucial, and a good monitoring and evaluation approach is one that focuses on stakeholder confidence. This implies that through monitoring and evaluation, the contribution of a peacebuilding intervention can be seen in meaningful and satisfying results. It further implies that there is potential for information to be used in institutional learning and improvement. In this way, focusing on stakeholder confidence can contribute to stronger evidence, which supports both future efforts and the peacebuilding community at large.

There is some global momentum to respond to these challenges and make peacebuilding more effective. The UN is currently conducting review processes and thematic debates of its peace and security tools, including a review of the UN peacebuilding architecture. This review states that peacebuilding remains a critically ‘underrecognised, underprioritised, and underesourced’, both globally and ‘within the UN system.’

The need to better design, plan and respond to peacebuilding needs is a critical issue that must be addressed with urgency. Currently, the Institute for Security Studies (ISS) is developing a new capacity-building process that aims to address individual and institutional shortfalls, and support the development of more effective responses. Peacebuilding practitioners who can draw on credible evidence and well-grounded arguments are better equipped to make a difference.

Of course, there is no one-size-fits-all solution. Practitioners should therefore carefully identify approaches that are appropriate to their context, and which would yield valuable and usable results.

Peacebuilding plans and responses need to be realistic, more considered, and better monitored at all stages. This is how the field could see an important mind shift; one that focuses on effective results rather than quick-fix outputs, and which will ultimately help peacebuilders to implement their responses more effectively.

This article was originally published by the Institute for Security Studies. View the original article here.