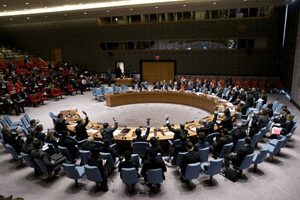 At the U.N., Only Optimists Need Apply

The first time I heard the German word “zwangsoptimist” was in a meeting to discuss ways to improve how the international system functions. Meaning “someone who feels compelled to be an optimist,” the word not only succinctly sums up my work for and alongside the U.N. over the past 27 years, but could also be a one-word job description for the organization’s next secretary-general.

Not everyone sees the world, or the U.N., this way. In his recent op-ed in The New York Times, titled “I Love the U.N., but It Is Failing,” outgoing senior U.N. official Anthony Banbury saw the glass as more than half-empty. The U.N. Secretariat that the next secretary-general will administer, he wrote, has a sclerotic personnel system. He described a dysfunctional organization with minimal accountability, where political expediency trumps universal values and facts on the ground, and whose peacekeeping operations apply antiquated tools to 21st-century conflicts.

It was quite an indictment, and an uncomfortable one for someone like me, whose day job involves reflecting on how to make peace operations more effective. A close relative, upon reading the Banbury op-ed, sent me a message asking, “Are you ready to give up?”

I am not, nor should any of us be.

The most surprising thing about Banbury’s op-ed is not its content, but that it even made the pages of The New York Times. It reads like a revelation, but anyone who was in the U.N. system for as long as Banbury was should already have been well familiar with the problems he enumerated.

Most people involved with the organization already are. The 16 members of the U.N.’s High-level Independent Panel on Peace Operations, for instance, pre-empted Banbury’s critique of U.N. peacekeeping last June:

“The messages the Panel has received from the field have been resounding: UN administrative procedures are failing missions and their mandates. Force commanders and troop contributors are exasperated by bureaucratic constraints that fail to meet reasonable demands in difficult settings. Senior managers complain of deep dysfunction and are frustrated by the inability to recruit rapidly on one hand and the obstacles to removing poor performers on the other.”

It recommended that the secretary-general allow the Department of Field Support to develop policies to expedite recruitment, empower managers in the field, and make them accountable. In emergencies, they needed leeway to do things quickly outside the normal rules.

What may not be evident to outsiders is that Banbury’s former role, and the target of his post-parting remarks, concerns the U.N. Secretariat, and not the organization’s myriad agencies, funds and programs—such as UNHCR, UNICEF and the World Food Programme—which manage their own operations, budgets and personnel systems, often far more effectively than the Secretariat’s peace operations.

We are once again in an era when the U.N. is divided between East and West, North and South.

But even in the area of peace and security, the U.N. has made many important and broad contributions to resolving conflict, restoring stability and ending disorder. I’ve seen it firsthand in East Timor, Liberia and Southeast Asia.

Presumably, Banbury has too. His first U.N. posting was as a human rights officer in a Cambodian refugee camp along the Thai-Cambodian border; his first peacekeeping mission was the U.N. Transitional Administration in Cambodia (UNTAC). Deployed in February 1992 after the fall of the Khmer Rouge and Cambodia’s subsequent civil war, UNTAC played a small part in resolving one of the great humanitarian tragedies of the Cold War. The operation was far from perfect: It was where sexual exploitation and abuse by peacekeepers first came to widespread public attention. But the Cambodian conflict was a complex problem that took years to resolve, in which the U.N. and its agencies were central and a U.N. peace operation was a key part of the solution.

Of course, resolving conflict is never neat and tidy. Peace agreements are often made with people who have done much killing. But as the U.N. panel’s report on peace operations underlines, peace is all about getting the politics right. Resolving decades of conflict often requires the global and regional dynamics to change first. Only then are regional players and the representatives who exercise the secretary-general’s “good offices” able to negotiate peace agreements and plans of action, not only to resolve conflicts but also to deal with the massive displacement that often accompanies them. It becomes a team effort when the Secretariat and member states play on the same side.

Such behavior at the end of the Cold War made many believe again in the U.N.; some even saw the organization as an integral part of a New World Order. UNTAC ushered in a decade of active peace operations that ended with the U.N. and then-Secretary-General Kofi Annan being awarded the Nobel Peace Prize in 2001. Not all were immediate success stories. But painstaking recoveries often followed even some of the worst bloodlettings.

Preventing conflict is a complex quest, one that, from the first word of the U.N. Charter, is the U.N. Secretariat’s main job. But just as we project our aspirations onto politicians, we are now doing the same for the next secretary-general. Banbury ends his op-ed with a call for the U.N. to be led by people for whom “doing the right thing” is normal. The “zwangsoptimists” in the system are looking for leadership.

But with the post-Cold War period now in the past, we are once again in an era when the intergovernmental organization is divided between East and West, North and South. The Secretariat, its missions and its internal governance are all proxy battlefields for interstate competition, not cooperation. In such a time, the 193 member states should take responsibility for fixing the U.N.’s dysfunction, rather than tasking one Secretary-General to do so. Managing the organization’s internal conflicts will be as much of a struggle for whoever seeks Ban Ki-moon’s job as resolving global crises. Only optimists need apply.

This article was originally published by the World Politics Review on March 28, 2016

Jim Della-Giacoma is the deputy director at the Center on International Cooperation at New York University, the editor-in-chief of the Global Peace Operations Review, and a visiting fellow in the department of social and political change at the Australian National University’s College of Asia and the Pacific. | Twitter: @jimdella