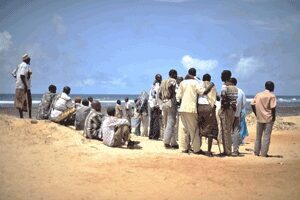 All peacebuilding is local

On his first day as Secretary-General of the United Nations, António Guterres issued an Appeal for Peace. As conflicts and crises wreak havoc across several continents, who would disagree with his call upon all—citizens, governments, leaders—to overcome their differences and put peace first?

Yet as crises around the world continue to demonstrate, peace can prove fiendishly elusive. Ambitious state building agendas have fallen well short of their unrealistic expectations. Large-scale interventions in Afghanistan, Iraq or South Sudan have not delivered peaceful states. Nor have international efforts turned Mali, the Central African Republic or other conflict-affected countries into stable and prosperous countries. Supporting peaceful and accountable states takes time, is difficult and often suffers setbacks. Often, the lack of progress has been blamed on “insufficient ownership” of the peace building process by local actors. The problem is that local ownership cannot be generated from the outside. Ultimately, it depends on the political calculations made by local leaders, based on their values and interests.

True, there have been significant successes. Most recently, the peaceful transition in the Gambia has demonstrated what preventive diplomacy can achieve when the international community comes together to deliver consistent messages, aligning all engagement behind the overarching goal of sustaining peace. Somalia, for all its problems, has made notable progress toward greater stability.

But where the liberal agenda has consisted in determining from the outside the best path for a country, it has seldom worked. This is not because democratic values are flawed—on the contrary, democracy remains the most successful political system – but because of a failure to adequately take into account the specific historic, socio-economic, political and behavioral realities in each individual country, and the limits of the ability of external actors to drive societal change. Ultimately, the fate of countries is in the hands of their elites – not only those nationally in charge in governments, but elites at all levels of society. Nudging them toward peace must start by understanding what incentives they have to either drive or block change. This means redoubling efforts to engage with all actors on the ground, aligning all instruments behind the single goal of supporting sustainable peace, and accepting that not all change is possible at the same time. Where efforts have been most successful has been when they have focused on building existing local capacities for peace.

All societies have mechanisms that enable them to manage conflicts through peaceful means, be they formal, such as the justice system or Parliaments, or informal, often rooted in culture and tradition. Institutions play a critical role in this, as has been widely acknowledged since the publication of the World Development Report of 2011. But institutions are made of people, and on the whole people make decisions that are informed by their personal needs, values and interests and those of their closest constituencies. The processes by which interests either converge or clash are by nature political.

Structural vulnerabilities matter. Yet many structurally fragile countries never experience violent conflict. Poverty or inequalities alone do not explain conflicts; economic shocks, environmental pressures, external influences and changes in the distribution of power are examples of factors that also play an important part. Ultimately, the key determining factor often proves to be the choices that leaders and opinion-formers make in responding to these events.

Dignity, fairness, identity and religion are powerful factors, easily manipulated by charismatic leaders at all levels of society to pursue personal gains. Fear also plays an important part. Milosevic in the former Yugoslavia, or the genocidaires in Rwanda, used incendiary rhetoric based on fear and de-humanization of “the other” to fuel violence. As Clausewitz put it, “war is the pursuit of politics by other means.” Honor, or esteem, underpin many of the choices that individuals and groups make. Real or perceived fears, injustices or humiliations often fuel divisive narratives of “us” versus “them” that are used to stoke up violence. Perceptions tend to matter as much as facts, a phenomenon of growing importance in the age of social media.

In this context, recognizing who stands to lose from stability and identifying the positive incentives that might nudge them toward a stable, violence-free political equilibrium is central to driving incremental change. Violence and exclusionary politics always serve the interests of some groups, including sometimes of those in government, especially when rent-seeking opportunities arise for insiders. In many states, the distribution of power is not regulated by formal institutions, but by networks of relationships; in such instances, bargains and transactions are driven by mutual dependency. Building sustainable peace therefore starts with understanding who are the key leaders at all levels of society, what are the interests of their constituencies, and where possible, engaging them on their terms, painstakingly investing in building relationships and tailoring engagements to each individual context. It also means being prepared to engage with highly controversial leaders.

Because conflicts are about rewriting the rulebook and changing the balance of power, all interventions to address conflict drivers affect power relationships. Deciding where to build a new road, how to increase the educational levels of girls and women, how to strengthen the rule of law, how to improve access to the health system for marginalized groups: no decision on assistance programs is politically neutral. The upshot is that development can make a significant contribution to addressing structural vulnerabilities – provided its impact on power relations is fully integrated in program design, under the explicit objective of building sustainable peace.

Because conflicts are about rewriting the rulebook and changing the balance of power, all interventions to address conflict drivers affect power relationships.

Monetary or programmatic incentives will not overcome resistances if the key leaders perceive change to be against their vital interests; nor will development assistance achieve sustainable outcomes unless these outcomes are in the direct interest of local leaders. Creating the incentives for difficult reforms thus means recognizing the temporal context in which interventions take place. The two fundamental questions that peacebuilders should ask themselves when violent conflicts loom are: what are the changed circumstances at that particular moment that tipped the hitherto balance, and in whose interest is it to change thereafter, given the new circumstances?

The core focus of preventive and peace building action should be to strengthen endogenous capacities for the peaceful management of change at all levels of societies, based on a thorough and regularly updated analysis of the actors, their motivations, the conflict drivers and trends, and of how external interventions impact on those drivers. Empirical research has demonstrated that politically smart, locally led aid yields better and more sustainable outcomes. Such approaches are based on, “iterative problem-solving, stepwise learning and brokering relationships to discover common interests.” Yet while international actors have come to recognize the central role of politics in development and peace building, they have found it hard to move from thinking politically to working differently.

New approaches to sustainable peace will require that external actors “abandon practices that assume progress to be simple, predictable and deliverable from the outside.” Building sustainable peace is less an activity in its own right, than a way of using diplomatic, development and security assistance to support local actors and institutions, both formal and informal, that enable the peaceful management of conflicts. One of the implications is that peace building does not necessarily require additional funding; what it needs most is a conflict-sensitive way of spending funds and of engaging with local actors on development, human rights and peace and security issues.

Deciding how best to support the delivery of security and justice, for example, must start from an understanding of what are the sources of security and justice that people trust and consider legitimate, rather than automatically assigning these functions to the state. Where informal mechanisms prevail, it means helping to gradually institutionalize them and progressively bringing them in line with universally recognized human rights, rather than seeking to impose externally devised “solutions” that are ill-suited for the context and that will be perceived as going against the interests of the local elites.

This approach can be summarized as:

This has implications for how international actors organize themselves to support prevention and peace building, including:

The Secretary-General has appealed to all of us to overcome our differences and put peace first. This is a call for humility and resolve—the humility to acknowledge the limits of influence that external actors have, and the resolve to help countries build their own social and political infrastructure that enable the peaceful management of disputes.

Joëlle Jenny is a fellow at the Weatherhead Center for International Affairs at Harvard University and the former director for Security Policy and Conflict Prevention at the European External Action Service.