This annex briefly outlines the institutional means and instruments through which the International Monetary Fund (IMF), the World Bank (WB), and the United Nations (UN) engage in fragility, conflict, and violence (FCV) contexts. It accompanies the UN-IFI briefing paper series.

The IMF interacts with all member countries along three possible dimensions: surveillance of economic policies, lending to support balance of payments difficulties, and capacity building (technical assistance and training) in macroeconomic-relevant policy areas. The IMF has no tools specifically aimed at FCV countries. However, in every dimension of its interactions, the IMF tailors its work with each country to its economic circumstances, while ensuring consistency of treatment of its members. The brief summary below will describe how the IMF tends to deal with various dimensions of fragility.

The IMF is a headquarters-based institution. Country teams, usually of 3-5 persons, are led by a mission chief. In countries where the IMF has ongoing interactions, usually with lending involved, a small in-country office is headed by the resident representative. Key decisions are made in Washington DC and subject to an interdepartmental review process, with internal disagreements being adjudicated by upper-level management. Ultimately, the IMF’s executive board approves all lending decisions and pronounces the institutional view of a country’s economic policies, based on staff analysis and recommendations.

Surveillance: Under its articles of agreement, the IMF is mandated to evaluate each member country’s economic policies on an annual basis, the so-called annual Article IV consultation. The fund can also respond to country requests for advice on economic policies. The fund generally exercises this responsibility in FCV countries, although the annual consultation can be delayed if, for example, the political or security system is unsettled, there has been a recent government change, or no agreement can be reached with the authorities on the dates of the mission. Without this basic building block of economic data gathering and analysis, the IMF’s ability to provide any economic evaluation or advice to countries or their development/donor partners is severely limited. See also the IMF’s Factsheet on Surveillance.

Lending: The IMF lends to countries hit by crises to provide them financial support and create breathing room as they implement adjustment policies to restore economic stability and growth. These crises can result from inappropriate domestic policies or from shocks from within or outside the country. There are a variety of lending instruments, with no- or low-interest loans being made available to low-income countries, and market-rate loans to wealthier countries. The duration and size of the loans vary according to the type of crisis, the time needed to take corrective measures, and the size of the country’s economy. Lending is often disbursed in tranches, subject to the country meeting certain agreed objectives on the path to restoring macroeconomic health. As there is no lending facility aimed at FCV countries, the IMF crafts its country lending to suit the type of fragility, its impacts on the macroeconomy, and the measures needed to restore stability. With its rapid lending instruments, the IMF has been effective in staving off new or renewed sources of instability, such as the Ebola crisis in West Africa. But for most countries, stabilization is a longer-term effort, and thus the fund has used multi-year economic programs with lending in tranches to support and encourage the gradual transitions necessary. In some cases, the IMF will not have a formal lending arrangement, but a SMP can be used to support country decisions and inform donor lending. See also the IMF’s Factsheet on Lending.

Capacity building: The IMF provides countries with technical assistance and training on a variety of matters, including fiscal and monetary management, macroeconomic statistics, and legal issues. It provides these services through short-term staff missions, long-term resident advisors, and workshops and courses. Much of this assistance is given through 16 regional capacity development centers around the world, with expertise and back-up provided by expert functional departments in Washington DC. The IMF views its technical assistance as “front and center” in its engagement with FCV countries, since weak institutions and a lack of capacity are often at the heart of fragility. See also the IMF’s Introduction to Capacity Development and How We Work.

Recent developments: In 2018, the IMF’s Independent Evaluation Office (IEO) undertook an evaluation of the IMF’s involvement in FCV countries. The IMF and Fragile States looked at lending and capacity building in fragile states, as well as human resources and security issues. It recommended that IMF management reaffirm the institution’s commitment to fragile states, strengthen internal governance mechanisms, focus on comprehensive country strategies, adapt its toolkit, and cooperate with other partners to ensure sustained financial support, ramp up capacity development, and incentivize staff to work on FCV countries. IMF management responded constructively to the report with an implementation plan, which is being executed.

The World Bank Group
The World Bank engages in FCV countries mostly through the International Bank for Reconstruction and Development (IBRD) and the International Development Association (IDA). IBRD financing focuses on middle-income countries. Its 2018 loan portfolio (commercial grade and concessional) was US$ 22.6 billion The IDA complements the IBRD by focusing on the world’s poorest countries and combining credits on concessional terms ($19 billion in 2018) and grants ($5 billion in 2018). IBRD raises most of its funds in the world's financial markets with additional capital provided by its shareholder governments. IDA funds come from government contributions, mobilized through three-year replenishment rounds, and income transfers from IBRD and the International Finance Corporation (IFC). In its 18th replenishment (IDA18), which began in July 2018, IDA doubled its financing from US$ 7 billion to US$ 14 billion. Finally, the WB manages a number of trust funds for donors, notably in countries that are not eligible for direct WB financing.

All WB institutions provide financing to and through country governments, even when funds for project implementation are transferred to other partners (including UN entities). Assistance is guided the WB’s Country Partnership Framework (CPF), itself based on a Systematic Country Diagnostic (SCD) which identifies the most important challenges and opportunities a country faces in advancing towards the twin goals of poverty alleviation and sustainable development. Over the last few years, the WB has increasingly articulated a more tailored response to diverse situations of fragility. The Risk and Resilience Assessments (RRAs) in particular have helped the WB and partners identify the drivers of fragility to ensure that country strategies (including CPF) and programming systematically address core grievances.

On the funding side, it has introduced several tools to scale support in FCV contexts, in addition to its post-conflict and re-engagement allocations, emergency operational policy, and procedures. The Risk Mitigation Regime (RMR) has provided US$ 780 million as of July 2019 in additional concessional financing for programs that specifically address socioeconomic exclusion, unmet expectations, and the drivers that risk fueling conflict. Second, IDA18 introduced the Sub-Window for Refugees and Host Communities (RSW) to provide US$ 2 billion to support host countries as they respond to forced displacement crises. Finally, a Private Sector Window (PSW) has been established to catalyze private investment where fully commercial solutions are not yet possible and where the WBG’s other financial instruments are not sufficient. In less than two years of operations, more than US$ 300 million has been allocated, unlocking over US$ 800 million in investments from the IFC and political risk insurance from the MIGA—and further mobilizing an estimated US$ 1.5 billion of additional private financing. These reflect an increased focus on supporting preventive action, based on the findings of the joint UN-WB report Pathways for Peace, and addressing grievances related to exclusion that are at the root of many violent conflicts.

Importantly, the WB has completed its first Strategy for Fragility, Conflict and Violence. The strategy positions FCV as a core part of the WB’s business, and draws on the lessons learned from IDA18 to ensure the WB can more systematically scale up efforts to address the key drivers of FCV in affected countries and their impact on vulnerable populations. It proposes a revised methodology for the typology of FCV contexts, with a view to tailoring and prioritizing WB approaches and responses to needs on the ground, and along the following four objectives: remaining engaged in situations of active conflict and crisis to preserve development gains; helping countries escape fragility, notably through enhanced state capacity and legitimacy; mitigating the impact of FCV on the most vulnerable; and strengthening institutions and macro-stability. Finally, the strategy commits the WB to strengthening its operational effectiveness in its personnel, partnerships, processes, and programming dimensions, which may require an expanded footprint.

The United Nations
The UN’s overall financial footprint (revenues) was $53.2 billion in 2017. The makeup of this revenue (provided primarily by member states, except for a few UN entities such as the UN Children’s Fund, or UNICEF, which receive significant private sector donations) impacts the organization’s flexibility and speed of response. A large part of it ($23.6 billion) is provided in the form of earmarked funds for specific projects. The major spend categories are development (39%, or $21 billion), humanitarian assistance (32%, or $17 billion), peace operations (19%, or $10 billion), and on norms, standards, policies, and advocacy (10%, or $5 billion).
The UN’s responses are also shaped by a fragmented governance architecture. System-wide direction for the UN’s development work is set by the General Assembly. Specific mandates and programming priorities for Agencies, Funds and Programs (AFPs, such as the United Nations Development Programme, the World Food Programme, and UNICEF) are agreed by their respective boards (member states). Executive directors of funds and programs are appointed by the Secretary-General (SG) and report to both the SG and their boards, whereas executive directors of agencies are appointed by and report to their boards only. Mandates for secretariat entities—such as the Department of Political and Peacebuilding Affairs (DPPA) and Department of Peace Operations (DPO)—are defined by the General Assembly, but management authority lies with the SG. DPPA and DPO manage peace operations (political and peacekeeping missions respectively) that are mandated by the UN Security Council but resourced by the General Assembly (through its 5th Committee), based on proposals made by the Secretary-General.

At country level, the UN is organized around UN Country Teams (UNCT), coordinated by the Resident Coordinator (RC) who reports to the SG, and country heads of AFPs reporting to their respective headquarters. In many FCV contexts, the UNCT operates alongside a peace operation, led by a Special Representative of the SG (SRSG). The SRSG has overall responsibility for coordinating the overall presence but does not have formal authority over the RC’s function and the AFPs on the ground. Country responses are articulated in a 3-5 year cooperation framework, which often includes mission priorities and activities where relevant, in which case the design of the framework is a shared responsibility between the SRSG and the RC, and requires approvals from the different headquarters structures. Resources for country responses come from a mix: headquarters allocations (including assessed contributions for missions, which include very small programmatic funds), bilateral donor funds for specific projects, country-level and global funds (e.g. the Peacebuilding Fund and the SDG Joint Fund) and vertical funds.

In recent years, efforts to increase impact in FCV settings have focused on the following dimensions, including through the UN reform process: greater integration of analysis, planning, and programming activities between the different parts of the UN presence on the ground; increased use of pooled funds (which provide more flexibility and promote greater coherence); enhanced delegation of authority to the field; greater empowerment of the RC and mutual accountability between RCs and AFP country heads for greater alignment of efforts; and more emphasis on the UN’s role as a provider of integrated policy advice, a convener, and an enabler for other actors to deliver support. 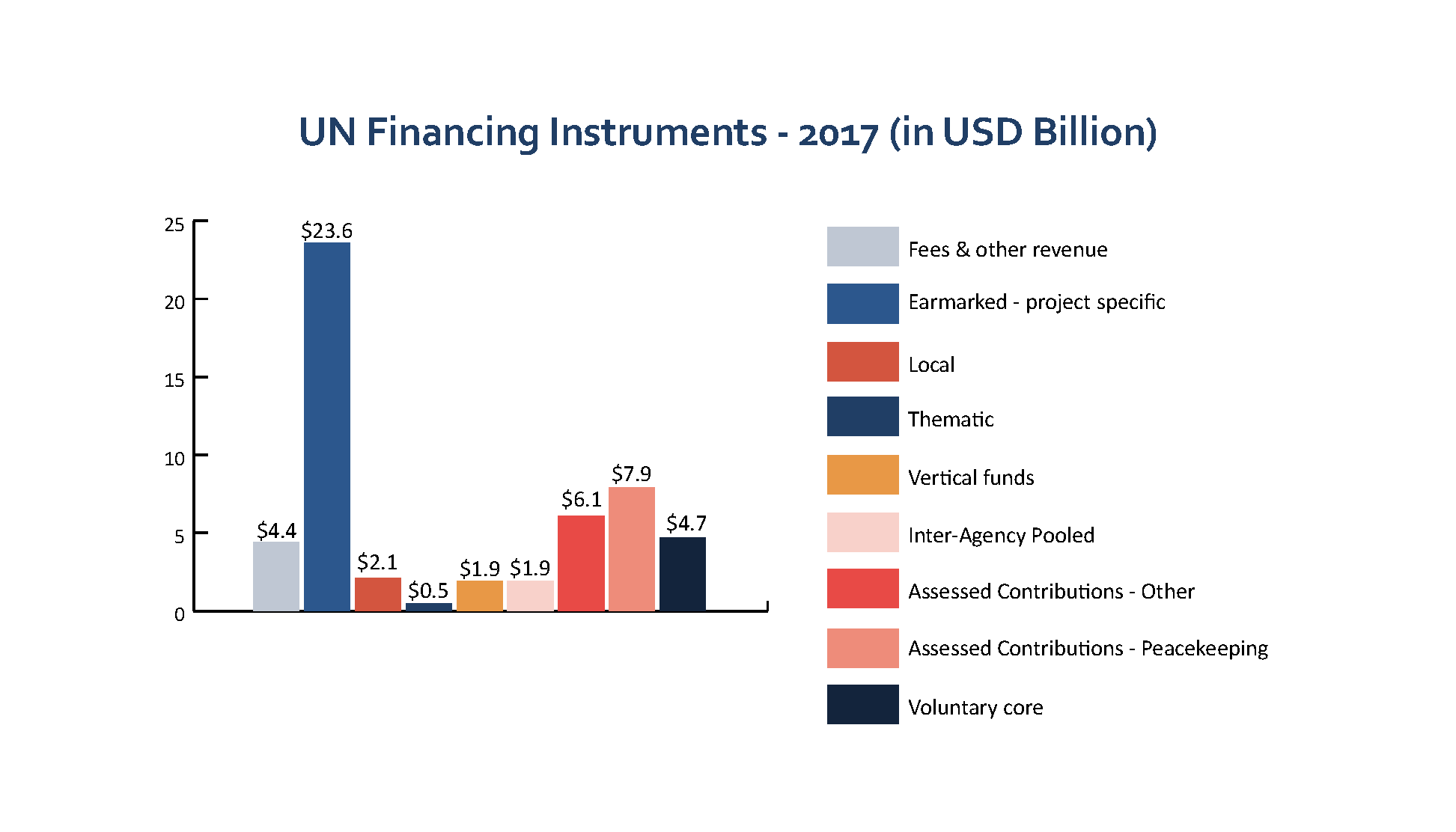 Paige Arthur, A Stocktaking of the UN-IFI Relationship on Prevention and Peacebuilding, 2018 to 2020