The Situation in Afghanistan and Prospects for International Cooperation: Perspectives on India, China, and the US

India, China and the United States have shared interests and stakes in promoting peace, reconciliation, stability and development in Afghanistan and in preventing terrorist groups from establishing sanctuaries and secure bases there. Against this backdrop, six experts from India, China and the USA will discuss complex political, economic and security challenges faced by Afghanistan (including in the context of the upcoming parliamentary elections), review the state of play with regard to the peace and reconciliation process in the country (including contacts with Taliban) and specifically discuss the prospects for international collaboration (towards facilitation of the infra-Afghan dialogue and the peace process and in the areas of development assistance and capacity building in Afghanistan). The panelists will also explore areas of cooperation among India, China and the United States with regard to Afghanistan. 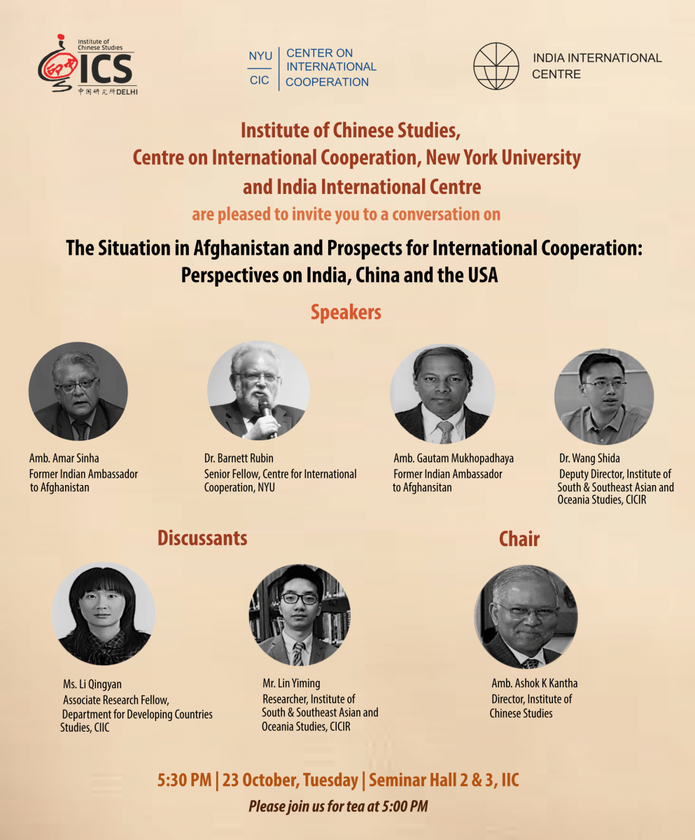 Dr. Barnett R. Rubin is a Senior Fellow at New York University’s Center on International Cooperation, where he also directs the Afghanistan-Pakistan Regional Project. From April 2009 until October 2013, Dr. Rubin was the senior adviser to the Special Representative for Afghanistan and Pakistan at the U.S. Department of State. He previously served as special advisor to the UN Special Representative of the Secretary General for Afghanistan, during the negotiations that produced the Bonn Agreement. He subsequently advised the United Nations Assistance Mission in Afghanistan on the drafting of the constitution of Afghanistan, the Afghanistan Compact and the Afghanistan National Development Strategy.Dr. Rubin is the author of Afghanistan from the Cold War through the War on Terror (2013) and has written numerous articles and book reviews on Afghanistan, South and Central Asia, U.S. foreign policy, conflict prevention, state formation and human rights. His articles have appeared in Foreign Affairs, Foreign Policy, The New Yorker, Survival, International Affairs, The New York Times, The Washington Post and The New York Review of Books, as well as several academic journals.

Amb. Gautam Mukhopadhaya has served in Indian Embassies in Mexico, France, Cuba, the Permanent Mission of India, New York, and Ministry of External Affairs, India; as well as on deputation with the Ministries of Culture and Defence of India, Consultant on Social Development at the UN, New York, and Visiting Fellow at the Carnegie Endowment for International Peace, Washington DC. He graduated from the NDC and re-opened the Indian Embassy in Kabul in November 2001 after the ouster of the Taliban, and served as India’s Ambassador to Syria, Afghanistan and Myanmar before retiring from service in May 2016.

Dr. Wang Shida is Deputy Director of the Institute for South & Southeast Asian and Oceania Studies at the China Institutes of Contemporary International Relations (CICIR). Wang received his BA in Art in Shandong Normal University and his MA in Law in China Foreign Affairs University. He received his PhD in International Politics & Relations from the China Institutes of Contemporary International Relations (CICIR) in 2014. In 2015 he was a Visiting Scholar at Center for International Cooperation (CIC), New York University. Wang’s main research focus is the political and security situations in South Asia. Wang published several books as well as dozens of articles. For example,“The Research on Belt and Road Initiative” (Published by Commercial Press, Jan 2017). “The Terrorism Situation and Regional Security in Central and South Asia” (Published by Si Chuan Press, Aug 2013).“The Report on Regional Security of South and Central Asia” (Published by Intellectual Property Pess, 2013).“The Coexistance of China and U.S in Asia Pacific”(Published by World Knowledge Press, 2012).

Amb. Ashok K. Kantha is currently the Director of the Institute of Chinese Studies.  He was Ambassador of India to China until January 2016. Prior to this, he was Secretary (East) at Ministry of External Affairs in New Delhi. His previous assignments include High Commissioner of India to Sri Lanka and Malaysia, Consul General in Hong Kong, Deputy Chief of Mission in Kathmandu, and Joint Secretary (East Asia) and Director (China) in Ministry of External Affairs.

Ms. Li Qingyan has been associated with China Institute of International Studies (CIIS) since 2006. Ms Li is an associate research fellow in the Department for Developing Countries Studies, where she specializes in South Asia, China’s Neighboring Security and “One Belt And One Road” (“China-Pakistan Economic Corridor”) etc. She has presided over or participated in a number of national and provincial research projects related to those issues. Ms. Li has published dozens of academic papers both in Chinese and English as “New Developments in South Asia and their Impact on the Belt and Road Initiative”, “China’s Diplomacy towards South Asia”, “The US and Chinain Afghanistan: Cooperation and Competition”and built a strong reputation in China’s academic circles as council member of Chinese Association for South Asian Studies.

Mr. Lin Yiming is a researcher at the Institute of South & Southeast Asian and Oceania Studies, China Institutes of Contemporary International Relations (CICIR). He graduated from Peking University and joined CICIR in 2014. His major research interests include Pakistan-related issues, counter terrorism and deradicalization. He writes chapters for several CICIR publications, including annual Strategic and Security Review, and International Terrorism and Counter- terrorism Yearbook, also publishes papers and commentaries on journals and media, including Indian Ocean Economic and Political Review, World Affairs etc.